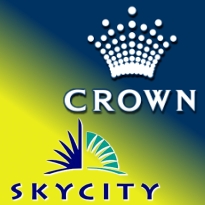 The Crown Casino in Melbourne has reached a deal with Betfair that will see the betting exchange act as official Presenting Partner of the 2013 Aussie Millions Poker Championship. The deal gives Betfair a number of premium branding positions, including on the poker tables themselves, while Crown gets a wad of Betfair’s money. Both sides claim to be over the moon about the deal, describing each other in terms normally reserved for syrupy wedding toasts. The tourney gets underway Jan. 17 and continues until Feb. 3.

Shortly before Christmas, Crown Ltd. boss James Packer purchased an additional 13.9m shares in the casino company, raising his total holdings from 48.1% to 50.1%. At $10.33 per share, acquiring majority control of Crown cost the Aussie billionaire around $145m. Australian law allows individuals holding over 20% of a company’s shares to buy a further 3% every six months without triggering formal takeover processes and the Australian Financial Review reported that it was the second such purchase for Packer in 2012. While Packer was making his move, Crown non-executive director John Alexander sold just under 250k shares – half his holdings in the company – for $2.56m, sparking rumors that Alexander was on his way out the door. Either that or Alexander really overspent on his Christmas shopping this year and is steeling himself to face his Amex bill when it appears in his mailbox in January.

Over in New Zealand, SkyCity Entertainment Group has sold its half-share in the Christchurch Casino to co-owner Skyline Enterprises for $80m. At the same time, Skyline sold its 40% stake in the Queenstown Casino to SkyCity for $5m. The New Zealand Herald quoted SkyCity CEO Nigel Morrison saying the deals were made because “we prefer to be outright owners of the properties we are involved in.” Morrison said the deal enabled SkyCity “to build our international VIP business in a major tourism destination” that is “so iconic to New Zealand and has a high international profile.” SkyCity’s VIP business was recently the subject of unflattering headlines suggesting the New Zealand government was improperly easing visa requirements for SkyCity’s Chinese gambling whales, but Morrison maintains that such VIPs “generate much-needed export dollars for New Zealand and will bring extra economic activity to the Queenstown region and the country as a whole.” Speaking of extra economic activity, SkyCity also announced it would invest $375m to upgrade and expand its casino in Adelaide.