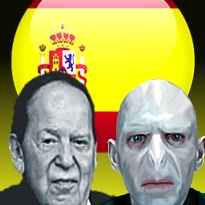 The regulated Spanish online gambling market has been open for business since June 2012 and the country’s gaming regulator Dirección General de Ordenación del Juego (DGoJ) has dished the dirt on who’s spending how much on what. As reported by El País, slightly over 1m online players wagered €2.3b in the first six months of regulation, generating €88m in gross gaming revenue (GGR) for the holders of the country’s 53 gaming licenses (although three of these license holders – PokerStars, Bet365 and Bwin.party – are making much more than the others). The government expects to reap €140m from the sector in 2012, which is €40m more than they’d projected. (So, uh, refund? No? No? Bueller?) The online sector currently accounts for just 17% of Spain’s total gambling market, although that should grow sharply with the promised introduction of online slots in 2013.

The most popular (yet least entertaining) form of online gambling in Spain is the lottery, with 69% of gamblers admitting (confessing?) to buying tickets online. Sports betting was the second most popular online activity at 52% participation, while poker was third with 38%. In terms of generating turnover, poker led the pack with a 40% share (€952m), while sports betting was again second with €861m, casino games third at €371m and bingo at €24m. Revenue-wise, sports betting emerged triumphant with €43.5m, followed by poker (€30.2m), casino (€10.5m) and bingo (€3.7m). Gender-wise, Spain’s online gamblers are 68% male and mostly reside in the 25-44 age group with a university education. The number of online gamblers has reportedly risen five-fold since regulation.

On the offline front, the ruling majority party in Madrid is catching hell for approving regulations that opposition parties say read like a love letter to Las Vegas Sands (LVS). Among the new perks that ‘integrated development centers’ like LVS’ proposed EuroVegas site in Madrid will enjoy are the right to stay open around the clock, the ability to extend credit to players and a tax rate set at 10% of gross income. EuroVegas will also be allowed to offer a broader variety of casino games than casinos outside Madrid.

El Pais reported that the regulations were approved a couple days before New Year’s Eve as part of an unrelated omnibus bill. The reaction from the minority parties can charitably be described as a hissy fit, with the Socialist Party referring to the omnibus bill as providing “safe passage for corruption” while United Left representatives pulled out the Harry Potter metaphors, calling it the “Voldemort law.” We guess that’s a thinly veiled slam at LVS supremo Sheldon Adelson, because Voldemort is referred to ‘He-Who-Must-Not-Be-Named’ and Adelson donated most of his estimated $150m in Republican Party 2012 election campaign contributions via 501(c)(4) organizations, which aren’t required to publicly reveal their donors’ identities. Anyway, we suspect some legislator is already planning a ‘Hermione law’ in an ill-advised attempt to meet Emma Watson, who will turn up her perfect nose after being told these Spaniards are only 68% male.