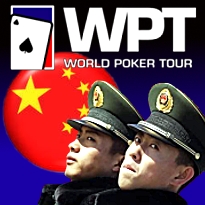 Authorities in China are patting themselves on the back for a job well done on the anti-gambling front this year. State news agency Xinhua quoted Ministry of Public Security statistics detailing how police dealt with a total of 347k gambling cases over the course of the year, leading to the closure of over 30k gambling dens, the breaking up of 10k criminal gangs responsible for running those dens or the gambling machines therein, the detention of over 5,700 suspects and the seizure of RMB 4.36b (US $697m) of ‘illicit funds.’ Police also seized over 210k gambling machines this year, and in a coordinated demonstration on Wednesday, police in 100 cities publicly destroyed over 60k of those machines. Xinhua also claimed police were increasingly turning their focus on gambling “through online video” which the rest of us refer to as ‘live dealer.’

World Poker Tour organizers are hoping the Chinese authorities don’t decide to end the year with a high profile bust of some gwei-lo interlopers. The WPT is making an overdue return to Chinese shores this Friday for the WPT National China at the MGM Grand Sanya in Hainan province. The WPT produced a televised traditional Chinese poker tournament in the country for a couple years last decade, but haven’t been back since 2009.

This weekend’s tournament is a coproduction with Beijing-based OurGame.com, which offers 30 different free-play board and card games including mahjong and Chinese forms of poker, in both traditional and simplified Chinese as well as Japanese and Korean languages. A division of SeaRainbow Holding Corp., OurGame is keen to boost interest in Texas Hold’em among Chinese players, in part because CEO Eric Yang believes poker’s (alleged) sophisticated reputation will appeal to affluent, status-conscious players, which in turn could allow him to charge higher rates to advertisers. OurGame claims to have 70m registered users, 10m weekly active users and 320k peak simultaneous players.

As for the game’s legality, Yang told the Wall Street Journal that the authorities had approved the WPT event based on the organizers describing it as a sporting event rather than a gambling game. The tournament was an invite-only affair for which event sponsors, not the players, put up the $700k prize pool. (Thirteen-time WSOP bracelet winner Phil Hellmuth is among the players who received invites.) OurGame has enlisted China-born poker pro David Chiu to help convince the government that poker is “a game of the mind and entertainment.” Thinking long term, WPT CEO Steve Heller says the Sanya event is primarily an attempt to “develop the game” in the minds of China’s player pool.

Not for nothing, but the WPT is a division of pan-European online gambling operator Bwin.party digital entertainment, and China is a country in which co-CEO (soon to be lone CEO) Norbert Teufelberger has yet to be arrested, so here’s a happy golden lucky opportunity for online gambling’s leading bad boy to get another persona non grata stamp on his passport.