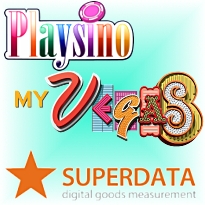 Social game developer/publisher Playsino has brought its multiplayer Bingo World HD app to Apple’s iPhone, following hot on the heels of the game’s iPad launch a week earlier. Playsino CEO Brock Pierce told Social Casino Intelligence the product was “the most user-rich bingo game on iOS,” allowing users to play four cards simultaneously. Originally developed by Foghorn Games, which Playsino acquired in October, the bingo app’s back-end has been reconfigured to permit cross-platform play with Android and Facebook in the coming months.

myVEGAS, the Playstudios-powered social casino Facebook app launched by MGM Resorts, has added three-reel slot game New York-New York to its repertoire. The game involves a family of tourists attempting to hail a cab in Manhattan, helping a socialite rescue her lost poodle and getting caught up in a ‘daring armored car heist.’ We know the actual New York City recently had a milestone day in which not one single person was murdered, but frankly, we wish the app had opted for the 1970’s Big Apple depicted in movies like Taxi Driver. How much more ‘daring’ would it be if, whilst locating that socialite’s poodle, that family of tourists also had to rescue a teenage hooker from a slimy pimp’s clutches? Or would that be too real for the virtual crowd?

There’s no denying that the availability of social casino games has exploded this year, but research from Superdata shows the amount of people actually playing the games fell 8.5% from September to October. Revenue generated by US social casino players fell $11.5m over the same period. Much of that loss is attributed to Zynga Slingo shedding a whopping 15m users in October, which pushed the percentage of total social gaming attributable to casino games from 32.5% to 31%. Superdata CEO Joost van Dreunen suggested to GamaSutra that the dip was predictable, as players “are probably saving their dollars for the holiday season” and thus October’s tally wasn’t necessarily the beginning of a trend. At least, one that won’t extend beyond January…

If you’re looking for evidence of continued social gaming growth, Superdata says look to Asia, where revenues have increased 28% in 2012 and are expected to top $5b by 2015. At the recent Social Gaming Asia Summit, Edelman China digital creative director Kestrel Lee contrasted the North American social gaming decline with the situation in China, where 45% of the country’s 125m social gamers spend money via online or prepaid payment methods and “spending on mobile gaming is higher than Korea.”

Social gaming has undeniably benefited from a lack of restrictive regulations, and while Japanese authorities have demonstrated a willingness to rein in its social gaming companies, regulators in other countries have not yet followed their lead. But Belgium, which already boasts a blacklist of unapproved real-money online gambling operators, may soon add certain social gaming operators to the naughty list. Representatives of the Belgian Gaming Commission told attendees at last month’s World Regulatory Briefing that if a social game’s characteristics met the criteria of gambling – a game played for stakes involving an element of chance – then the BGC would be compelled to restrict such play to BGC-licensed operators. The key here would be whether virtual currency can be defined as ‘stakes.’ Or is all this just so the BGC can open a new front in its war with Bwin.party by targeting its fledgling social gaming division Win Interactive?