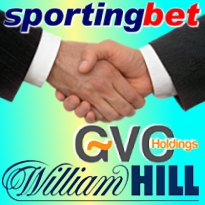 Just ahead of Tuesday’s UK Takeover Panel-imposed deadline to resolve negotiations, Sportingbet has agreed to a reduced takeover bid by the duo of William Hill and GVC Holdings. The Hills/GVC tandem issued an announcement touting their ‘conditional agreement’ to acquire Sportingbet for £485m, which breaks down to 56.1p per share, a 8.5% haircut from the previous 61.1p offer, which valued Sportingbet at £530m.

The ‘revised proposal’ consists of 44.8p in cash, 1.1p dividend in cash and 0.0435 new GVC shares per Sportingbet share. Despite the apparent agreement, the parties sought and received yet another extension on finalizing the deal, meaning there’s still “no certainty” that an offer for Sportingbet will be made by the new deadline of Dec. 18. Hills and GVC have agreed not to alter the terms of their proposal unless another bidder miraculously appears with a concrete offer of its own.

Tuesday’s announcement was preceded by frantic talks between the parties over the weekend, with Sportingbet holding a newly weakened hand after turning in a poor earnings report card that revealed revenues had fallen over a third. Hills, which is believed to be putting up at least £400m of the purchase price, is keen to absorb Sportingbet’s operations in regulated markets like Australia, Greece and Spain, while GVC is tipped to assume Sportingbet’s dodgier operations in eastern Europe and other grey/black markets. GVC acquired Sportingbet’s operations in Turkey last year.

Sportingbet’s board of directors has indicated that if an offer is made under the terms mapped out in the ‘revised proposal,’ they would unanimously recommend that shareholders accept the deal. Among Sportingbet’s significant shareholders are many of the execs who benefited handsomely from Sportingbet’s 2006 post-UIGEA ‘sale’ of Sportsbook.com to a shell company they themselves controlled for the grand price of $10 and the assumption of debt, which left Sportsbook.com’s minority shareholders holding their dicks and not much else. Not very sporting, that…