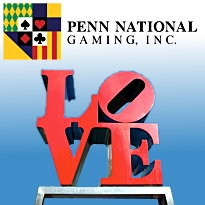 Shares in casino operator Penn National Gaming Inc. rose a hefty 28.24% on Friday after the company announced it would split its gaming and real property assets into two separate publicly traded companies, a process to be completed in the second half of 2013. The gaming side will operate under the banner of Penn National Gaming (PNG) while the real estate investment trust (REIT) will be known as PropCo. Existing Penn shareholders would receive common stock in PropCo via a tax-free dividend, after which PropCo would declare a $1.4b taxable dividend to comply with REIT qualification requirements. PropCo will own 17 casinos on 3,200 acres of land, for which PNG will be granted a 35-year lease. Penn presently operates 29 gaming facilities across 19 states. Sterne Agee analyst David Bain called the split “a tax efficient way to return capital to shareholders.”

Penn is one of six suitors for Philadelphia’s second (and final) casino license, for which the application deadline closed this week. Penn hopes to launch its second Pennsylvania casino near the stadiums in South Philly via a partnership with a non-profit group representing the city’s pension fund and school district, which would control two-thirds of the equity. In keeping with Steve Wynn’s penchant for class, Wynn Resorts hopes to build a sprawling luxury hotel-casino-retail-entertainment complex in Fishtown down by the Delaware River. That area is also favored by produce magnate Joseph Procacci’s PHL Local Gaming LLC. Developer Bart Blatstein wants to team with Hard Rock International to put a casino-hotel complex spanning three blocks in Spring Garden. Another developer, the Goldenberg Group, is teaming with Valley Forge Casino investors Ira Lubert and Michael J. Heller plus a group calling itself inner City Gaming to build a casino on a parking lot in Center City. Cordish Co. and Greenwood Gaming want to put a casino-hotel at 900 Packer Ave, where a Holiday Inn presently stands.

Pennsylvania currently has 11 casinos, and their collective gaming table revenue rose 4.2% to $55.3m in October. The rise came despite the effects of Hurricane Sandy, which was blamed for pushing October’s slots revenue down 4.4%. However, when you subtract the $2.2m in table game revenue generated at the Valley Forge facility, which wasn’t open in October 2011, overall table game revenue dipped slightly. Individually, the month’s worst performers were Presque Isle Downs & Casino in northwest Pennsylvania, which saw table revenue tumble 25% to $1.13m, and Parx Casino in Bucks County, which saw revenue fall 17% to $8.3m.

At the other end of the scale, Sands Casino Resort Bethlehem reported a 19% gain in table revenue to $12.8m, or 23% of the state’s total haul. As the rich like to get richer, Sands has applied to the Pennsylvania Gaming Control Board to add 31 more tables to bring its total to 183 and increase its Pennsylvania workforce by 107 employees. The GCB is scheduled to consider Sands’ application at a hearing on Tuesday.