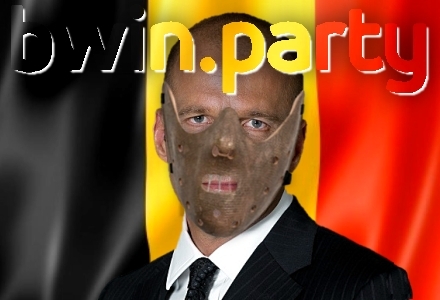 Following Norbert Teufelberger’s arrest in Belgium on Tuesday, Bwin.party’s PR department is spinning mightily, saying the company’s co-CEO “voluntarily conformed” with the Belgian authorities’ “request” to accompany them back to the station house for questioning. We’re sure Bwin.party shareholders were relieved to learn Teufelberger opted not to pull out his Glock and begin firing indiscriminately into the crowd at the Responsible Gaming Day conference, then leading police on an Italian Job high-speed chase through the Brussels streets to the Dutch border. (Naturally, we were sorely disappointed it didn’t happen, but life is full of little setbacks.)

Teufelberger was reportedly released just before 6pm on Tuesday, not long after Bwin.party stock closed down over 4% on the day’s news. eGamingReview reported that Teufelberger had agreed to convene the Bwin.party board to discuss whether or not to continue flouting Belgian law. The Financial Times reported Teufelberger has been given until Dec. 17 to provide answers to Belgian authorities.

Given Teufelberger’s public statements expressing his unequivocal disdain for the edicts of Belgian gaming regulators and courts, he’s likely counting his lucky stars he’s not spending the night listening to his Belgian cellmate playing Edelweiss on the harmonica. Whether charges will ulimately be laid against Teufelberger, or if Bwin.party now ceases playing hide and seek with its Belgian-facing domains remains to be seen. Regardless, the ripples from Tuesday’s events will undoubtedly continue radiating outward until they reach US shores.

SEEING STARS
With the possible exception of Caesars Entertainment, few companies are as anxious as Bwin.party to tap into a new online poker revenue stream from a regulated US market. After PokerStars was compelled to pull out of the US market following Black Friday, it refocused its immense marketing capacity on Europe and Bwin.party’s poker revenues have slipped with each successive quarter. Company execs routinely single out the “ever strengthening” Stars as the source of much of Bwin.party’s woes. (And that’s before Stars contemplates branching out to compete with Bwin.party’s sports betting and casino channels.)

Making matters worse, some observers are beginning to detect a pattern in Stars’ intentions for its new Full Tilt Poker acquisition. Michael Campbell, gaming analyst at Daniel Stewart & Company, told GamblingCompliance he believes Stars is using FTP as a dot-com site for grey markets while reserving PokerStars as an unblemished brand for regulated markets. If a market switches from grey to white, Stars applies for a license, provides a painless migration for customers from the exiting FTP to the new Stars.country site and business continues as usual. The net effect is to cock-block competitors like PartyPoker from gobbling up any unclaimed market share, making the US market appear to be an even shinier white knight on the horizon. Unless, of course, that vision turns out to be a mirage.

VALIDATION, VINDICATION, RATIONALIZATION
Last month, Bwin.party’s other co-CEO Jim Ryan told the Global Gaming Expo audience that Black Friday offered a “validation” of PartyGaming’s decision to exit the US market post-UIGEA, but true “vindication” would only come when PartyPoker made its triumphant Christ-like second coming to US shores following passage of that country’s federal online poker bill. (Despite Ryan’s spin, Party’s ‘decision’ to leave the US was a foregone conclusion following its earlier decision to take itself public – just as Stars’ decision to stay a private company gave it the flexibility to choose to stay in the US – and Bwin.party’s imminent ‘decision’ to quit Belgium will also be a ‘choice’ forced upon the company by its wish to see its name in lights on the London Stock Exchange.) But how will Ryan justify his company’s behavior in European markets when Bwin.party’s online poker tech provider license application comes up for discussion with Nevada gaming regulators early next year? “Sure, we routinely thumb our noses at your European counterparts, but that’s only because we don’t agree with their decisions!”

[ROGUE OPERATOR BONUS: Bwin has since fallen afoul of another gaming regulator, this time in Argentina, which revoked Bwin’s license after the operator failed to honor the obligations of its contract.)

Obviously, Nevada regulators will be under a lot of pressure to approve Bwin.party’s application because the online poker hopes of two local gaming licensees – MGM Resorts and Boyd Gaming – are dependent upon Bwin.party getting the rubber stamp. Regardless, it will be interesting to see what type of knots regulators will have to twist themselves in order to whitewash Teufelberger’s growing arrest record and his company’s selective compliance with gaming regulations when doing so might negatively affect Bwin.party’s bottom line. (On a Nov. 2 post-earnings call, Teufelberger complained that the roadblocks thrown up by Belgian regulators were costing the company €700k per month.)

This December is shaping up to be a potentially epic fail for Bwin.party shareholders. By the time the New Year rolls around, the world will know the fate of Sen. Harry Reid’s online poker bill, which, if it fails to pass, means a piecemeal state-by-state regulatory rollout for operators, with all the associated extra costs and delays. Not long after that, Bwin.party will release a new quarterly revenue report in which PartyPoker is expected to take an even greater hit than normal via defections to the rejuvenated Full Tilt Poker. Seasonal trivia note: did you know the original lyrics of Have Yourself A Merry Little Christmas contained the line “it may be your last…?”