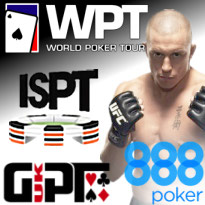 Josh Hale has topped a 622-strong field to claim the World Poker Tour Legends of Poker main event title at the Bicycle Casino in Los Angeles. Four days of play whittled the field down to six, including Ali Esiami, Jeff Madsen and Greg Mueller, but in the end it came down to Hale v. Max Steinberg. Hale started final table play as chip leader, but began heads-up action on the wrong end of a 3:1 chip advantage, thanks to Steinberg having eliminated the other four final tablers. But Steinberg’s hot streak ended one player short, leaving Hale with the $500k first prize. Steinberg settled for $293k, while the rest of the final table finished as follows: Raouf Malek ($192k); Esiami ($133k), Mueller ($97k) and Madsen ($75k).

Across the pond, Les Fenton overcame a record 1,954-strong field to win the Grosvenor UK Poker Tour (GUKPT) Goliath tourney at Coventry’s Ricoh Arena. On the down side, the ‘everyman’ tournament’s £100 buy-in meant Fenton took home a mere £31,210 for the victory. It would have been £35,800, but Fenton struck a deal with heads-up opponent Mark Harding, who bumped what would have been a £22,340 payday up to £26,610. On the up side, Fenton gets a seat at the GUKPT Champion of Champions tour finale. Meanwhile, Martyn Frey outlasted a field of 122 players to take the GUKPT Coventry main event title, earning £36,610. Matt Davenport was runner-up, earning £25,920.

Of course, poker pros have other ways of earning mad stacks o’ cash. Following the lead of Michael Mizrachi, Sam Trickett has signed on to help promote the International Stadiums Poker Tour (ISPT). The ISPT has a press conference scheduled for Sept. 3, during which it will (hopefully) offer up more details on its inaugural event, which aims to draw 30k players for a combination online/live tournament at London’s Wembley Stadium beginning May 31, 2013. Poker Channel Europe quoted Big One For One Drop runner-up Trickett as saying he had to be part of this “enormous” event because it meant “being part of the history of poker.”

Of course, you don’t have to be any good at poker to earn poker money, so long as you can (literally) kick people’s heads in. Mixed martial arts star (and admitted poker novice) Georges St-Pierre inked a global ambassador deal with 888 Poker in April, and the first fruits of that partnership have come to light as part of GSP’s Welcome Week promotion, in which 888’s Canadian players can win cash and MMA/888 swag. There’s also the GSP PokerCam Fight on Sept. 9, in which players will be able to view GSP folding in real-time via their webcam. It’s not every day that some lucky Canuck will forever earn the right to impress women in bars with true-life humble-brags of the night they ‘beat’ GSP’s ass. Just make sure GSP’s not standing behind you as you tell the tale.