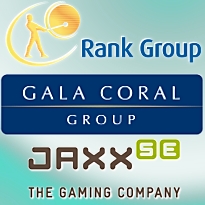 Rank Interactive, which includes Blue Square, was the star performer in percentage terms with revenues up 20.8% to £77.7m and operating profit up 26.5% to £10.5m. This week’s announcement of a deal with Unibet to offer casino and poker via Unibet’s Belgian site will help keep online in the black. On the flip side, Rank’s Spanish division, Top Rank España, saw revenues drop 12.8% to £29.2m while operating profits plunged 65% to £1.4m. Rank also announced it expects its £205m purchase of 23 Gala Coral casinos to be completed in September, which will make Rank the big swinging dick of UK casino operations.

As for Gala Coral, it posted its own figures for its fiscal Q3 ending June 30, reporting a 9% rise in turnover to £275.2m. Statutory gross profit rose 11% to £215.4m, while earnings were £64.2m, up 14% year-on-year, although if you discount Euro 2012 and the fact that the Grand National happened in Gala Coral’s Q3 this year but in Q2 last year, earnings rose a more modest 3% (even though the company described Euro 2012’s returns as “disappointing”). As with Rank, Gala Coral’s online operations outdid themselves, with Gala’s active players rising 61% and Coral’s rising 34%, creating combined gross profit growth of 28% and a 13% bump in earnings. Gross profits at Gala Coral’s Italian operation Eurobet were up 36% to £4.9m while earnings rose 43% to £2m.

Leave it to those ever-precise Germans to actually turn in Q2 numbers midway though a calendar year. Kiel-based betting operator JAXX saw net gaming revenues rise over 20% to €15.62m in the three months ending June 30. EBITDA was €6.95m while consolidated earnings hit €5.53m. Unlike Gala Coral, Euro 2012 helped push betting stakes at the myBet platforms and betting shops up 66% to a record €51.7m and hold doubled to €7.2m. The number of registered users rose 56k in Q2, while average customers per month rose from 16k last year to 23k this year, hitting a peak of 27k in June. JAXX hopes the start of the European football season will sustain its good fortune.