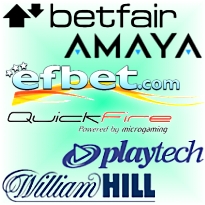 Wednesday marked Breon Corcoran’s first day as Betfair’s new chief executive. The former Paddy Power COO was named to the Betfair post in November, and to welcome him into the fold, the company announced a deal with Montreal-headquartered entertainment solutions provider Amaya Gaming Group. The three-year pact will see Amaya supply a selection of its unique proprietary and branded games to the Betfair Arcade via an OpenBet integration.

Isle of Man-based software provider Microgaming has inked a pact to provide its QuickFire Flash-based online casino and soft games suite to Malta-licensed operator Eurofootball Ltd. aka EFBet. Since the company formerly known as BalkanBet has been using Microgaming’s online poker software since early 2010, EFBet managing director Martin Simenov said QuickFire’s live dealer and miniature games offering was “the natural choice for us … Expanding our customer base in Eastern Europe and especially in Bulgaria is important to us and we know that bringing QuickFire’s popular offering on board will not only excite our current players but will help acquire new users too.”

Teddy Sagi, founder of online gaming tech provider Playtech, is set for another big payday stemming from the March 2011 sale of PT Turnkey Services Ltd. (PTTS) to Playtech. The terms of the sale called for Playtech to make an initial payment of €140m to PTTS’ owner World Wide Enterprises – a company in which Sagi has a beneficial interest – with the possibility of a further €140m down the road depending on various performance criteria. After alluding this spring to the likelihood of the second €140m payment being required, Playtech announced Friday that World Wide Enterprises would collect the top-up following PTTS’ “strong performance” over the past year. Playtech CEO Mor Weizer touted PTTS as having provided “profitable new revenue streams” and having “enhanced our ability to partner with third parties in regulated markets.”

UK betting operator William Hill has tapped social media advisers Lexis to help Hills properly engage its customer base via Facebook, Twitter et al. (Task No. 1: convince CEO Ralph Topping to stop tweeting photos of himself giving tight-fisted shareholders the finger.) The Lexis contract runs for three months, and Hills PR manager Kate Miller says it will give the bookmaker “the opportunity to promote to other markets as we expand internationally and tailor our content to various different marketplaces.”