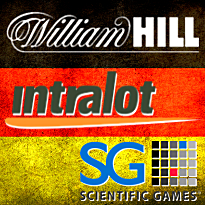 UK operator William Hill has become the latest company to rethink its German-facing business in the wake of the German länder approving a new Interstate Gambling Treaty and the federal government passing a new sports betting tax regime. SportsBookReview reported that Hills would no longer offer sports betting to German punters effective Friday, July 20 (68 years to the day Claus von Stauffenberg attempted to assassinate Hitler, for all you trivia buffs out there). For the moment, it’s business as usual for Hills’ casino, poker and bingo players, but Germans who only ever wanted to place sports bets with Hills can request cashouts. Hills’ 2011 acquisition of Nevada land-based sportsbook operations was recently approved by state regulators, but not before Hills’ past operations in grey-market jurisdictions like Australia was called on the carpet, so the German adjustment appears at least in part intended to demonstrate that Hills will mind its P’s and Q’s going forward.

As Hills’ German sportsbook closes its doors, ODS Oddset Deutschland Sportwetten GmbH (Oddset) is opening a window. Oddset has announced its intention to apply for one of the maximum 20 sports betting licenses allowed under the new interstate treaty, after being tasked by the German state to enhance and modernize the country’s existing Deutsche Lotto und Toto Block retail betting network’s 23k points of sale. To help realize this goal, Oddset has tapped US lottery tech provider Scientific Games International (SGI) and Greek gaming outfit Intralot to jointly provide the backbone of a retail and online sports betting operation in Germany. Intralot will provide Oddset with its Betting Platform, Risk Management Services and interactive Operational Services. Intralot CEO Constantinos Antonopoulos said his company’s “extensive know-how of sports betting operations” combined with SGI’s “considerable experience and knowledge of the local market” and the “powerful market position” of the German State Lotteries will result in a “modern, attractive and competitive product portfolio” that will become “the market leader in sports betting.” Oddset hopes to have all its ducks in a row by the end of the year.