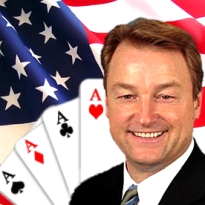 United States Sen. Dean Heller (R-NV) has responded to comments made earlier this week by his Democratic counterpart, Senate Majority Leader Harry Reid, that Heller (pictured right) would be Reid’s go-to guy for drumming up GOP support for the online poker bill cobbled together by Reid and Sen. Jon Kyl (R-AZ). Speaking to the Las Vegas Review-Journal’s Steve Tetrault, Heller said he’d talked to Senate Minority Leader Mitch McConnell (R-KY) and leadership deputies John Cornyn (R-TX) and Roy Blunt (R-MO) to “make sure … all of them have an idea of what we are trying to push in this effort.” Rumors have it that Reid and Kyl are attempting to sell skeptical Republicans on the legislation by stressing its (reported) strengthening of prohibitions against online sports betting and casino gambling contained in the 2006 Unlawful Internet Gambling Enforcement Act, while carving out a loophole for Nevada-regulated online poker.

Reid, meanwhile, told reporters on Thursday that he and Kyl were “now waiting again, as I do with a lot of things around here, to get some Republican support.” Apparently, the plan is to wait until the post-election lame duck session of Congress this November, then identify the right legislative “vehicle” to which an online poker bill could be (ahem) surreptitiously duct-taped, in order to give GOP senators the means to deny any knowledge of having voted for what amounts to an expansion of online gambling. Heller said it was “critical that something happens this year” at the federal level before more states follow the lead of Delaware in passing legislation that allows a broader palette of online gambling options. “Time is running out… if we get beyond this year, I think that states will have gone too far in their efforts to basically legalize everything.”

Of course, being a Republican, Heller has to tread carefully on this issue, lest he upset the party’s primary benefactor; a certain Sheldon Adelson, chairman of Las Vegas Sands and a man ‘morally opposed’ to all forms of online gambling. Heller says Adelson “has an opinion and obviously that is taken into consideration, and we have to work with it and around it to try to make something happen. I certainly don’t discount his position … he just wants to make sure this is a tight system, that we don’t have problems … with youth getting on and having access to internet gaming. I think his concerns are legitimate.” That said, Heller says he doesn’t regard Adelson’s voice as “being any stronger or any less important than anybody else. He is just part of the puzzle.”

But to paraphrase that old Animal Farm adage, some parts of the puzzle are more equal than others. On Wednesday, the Dallas News ran a story about how Adelson had “come to the rescue” of the campaign of Republican Senate hopeful David Dewhurst. A pro-Dewhurst SuperPAC raised a total $280k during May and June, of which $250k came from Adelson. Should Dewhurst be sworn in come November, do you think his first vote will be one that bites the hand that fed him?