It was all looking so good in the gambling sector. At the end of a booming first quarter, the Market Vectors Gaming ETF (BJK), comprising 52 gambling-related stocks across the globe, was up 16%, benefitting from strength in Macau and worldwide economic optimism. Despite weakness in the broader market, casino stocks continued to rise; by the beginning of May, BJK was up well over 20% in less than twenty weeks.

And then the bottom fell out. The European debt crisis caught the market’s attention (yet again), causing fears of a worldwide economic slowdown; on the other side of the world, projections of a lower growth rate on the Chinese island of Macau appeared to threaten the casino industry’s fastest-growing and most profitable market. Casino stocks gave back nearly all of their 2012 gains in less than a month; by quarter’s end, BJK was trailing the broad market year-to-date despite 2012’s blazing start: 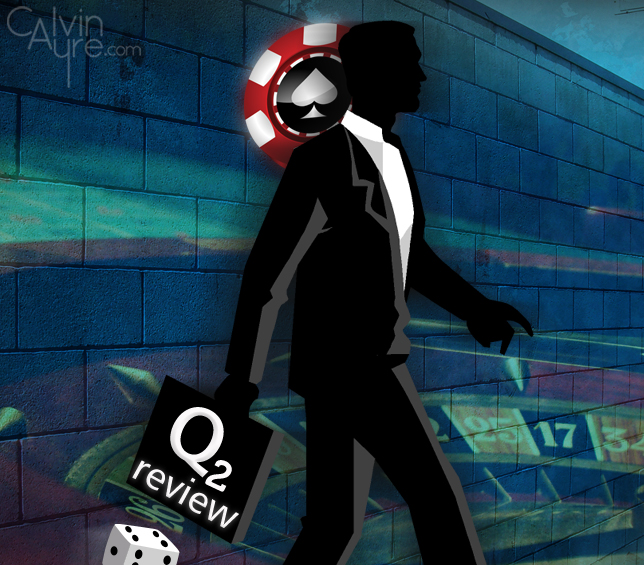 Of course, this is what gambling stocks do; their generally leveraged nature and perceived sensitivity to economic confidence means they generally out-perform the broad market in good times; and fall harder when investors are selling equities. Interestingly, in the second quarter, it was the industry’s leaders who saw the largest falls. Las Vegas Sands (LVS) fell 24%; Wynn Resorts (WYNN) over 16%; MGM Resorts International (MGM) dropped 18%. Their Macau-based subsidiaries, and Asian competitors such as Galaxy Entertainment (0027.HK) and Melco Crown Entertainment (MPEL) all saw double-digit percentage declines as well. Larger US-based operators struggled as well, as I predicted after the first quarter, when many US-facing casinos were left out of the strong bull run in equities. Pinnacle Entertainment (PNK), Ameristar Casinos (ASCA) and Boyd Gaming (BYD) saw meager gains in the first quarter that turned to above-market losses in the second quarter.

Yet other gambling stocks showed surprising strength. European iGaming stocks like 888 Holdings (888.L), Paddy Power (PAP.L), and Betsson AB (BETS-B.ST) were actually positive for the quarter, defying the fears of financial Armageddon on the Continent. And two smaller operators, Dover Downs Entertainment (DDE) and MTR Gaming (MNTG), posted strong gains, overcoming the fears of cannibalization I covered just last week. MNTG did weaken towards quarter’s end; as I wrote a week ago, it looks like an excellent potential short play. Buyers are leaving the stock, and the company’s new Ohio operations do not look set to replace the effect of Ohio’s new casinos on MTR’s existing properties in western Pennsylvania and West Virginia. After more than tripling from November lows, it looks like MNTG has room to fall.

Despite the volatile movement in the stock market, the second quarter was actually rather non-eventful in the gambling industry at large. US iGaming legalization continued to move at a slow pace; Delaware became the second state (after Nevada) to legalize online poker. Delaware – whose land-based casinos, including Dover Downs, have been buffeted by casino expansion in surrounding states like Pennsylvania and Maryland – one-upped the US’ most gambling-reliant state by legalizing not just online poker, but slots and table games as well. Delaware’s decision to expand beyond online poker – which has been the primary focus of legalization advocates – may be more important than it appears at first glance. The fact that the state is legalizing forms of gambling beyond poker may give cover to legislators in other states who wish to tap into the potential revenue streams iGaming could provide.

On the other hand, six months after the Department of Justice opinion that appeared to legalize intrastate online gambling, only two states – who, combined, represent just 1.2% of the US population – have legalized any form of iGaming. In more populous states, legalization advocates have faced nothing but frustration. Efforts in California and Illinois appear to have stalled; New Jersey’s on-again, off-again bill has moved forward but Governor Chris Christie’s opinion on the bill remains unclear.

The larger problem for investors remains: it is difficult to actively participate in the potential iGaming boom – even if the US market should meet the more optimistic estimates made by its proponents. Based on current legalization efforts, the US online gambling market seems likely to be led by existing operators such as Caesars Entertainment (CZR) and MGM. Yet CZR’s IPO was a craven, manipulative issuance designed solely to allow its investors – who used billions in debt to buy out the company near the market top in early 2008 – to exit at a more reasonable loss. Our own Calvin Ayre summed up the case against Caesars stock in a comment on my piece last week: “Caesars really is just an organisation that has evolved to be a debt servicing organisation….there is no way an online strategy can save this organisation and that is why the shareholders did that fucked up share sale (that should have been illegal).” MGM, meanwhile, has $13 billion in debt and an albatross around its neck in the money-losing CityCenter complex in Vegas; yet it has consistently promoted its online poker joint venture as a potential game-changer for the company. But, as I argued last month, its 25% stake in the joint venture (with Boyd Gaming (BYD) and Bwin.party Digital Entertainment (BPTY) is worth, under the best possible circumstances, no more than $2 billion. Ironically, one of the purest plays in the sector may be struggling BPTY, which is trading near an all-time low. BPTY unveiled its new social gaming strategy in late May, and at its current depressed price would be a strong buy if it can see some success in that segment, or if it the owner of PartyPoker can make an inroad in the US online market. Of course, given its declining market share in its legacy European markets, that remains a giant “if.”

Even beyond iGaming, the key drivers for the gambling industry – and gambling stocks – remain largely unchanged. Macau remains the growth market for land-based casinos; the recent pullback in Macau-facing stocks has created a buying opportunity for long-term investors. Back in April, I chose Galaxy as a potential winner in the battle for market share on the island; but with leaders like LVS and Melco Crown also trading at a discount, any of the Macau-facing operators are worth at least a long look from value-minded investors.

But overall, the key themes facing the gambling sector remain the same as they were at the start of the year. Investors should focus on the growth markets in Asia; apply a healthy skepticism – and discount – to stocks in the highly regulated, highly competitive online gambling markets worldwide; and be wary of high-debt, low-growth players such as MGM and Isle of Capri (ISLE).

Outside the gambling sector, the quarter’s big news was the Facebook (FB) IPO, one of the most-hyped offerings in the history of the US equity market. Ahead of the effort, I (incorrectly) predicted that Wall Street would support the stock, resulting in further gains for the already-overvalued stock. That, of course, did not happen; trading glitches on the NASDAQ and a backlash against Facebook’s astronomical valuation knocked the stock well below its $38 per share initial offering price. In the aftermath, I defended the widely criticized IPO, noting that the $38 issuance price had garnered extra billions for the company and its investors. And indeed, as the market moved on toward the European crisis and media coverage of the IPO finally faded, Facebook began to rise, reaching $33 just weeks after its low of $25.52 at the beginning of June. But the stock has again weakened, closing Friday at $31.10. Still, its market capitalization of $66.5 billion puts it among the 100 largest publicly traded companies on the US market, ahead of Honda Motor (HMC), 3M (MMM), and airline manufacturer Boeing (BA), among many, many others. As I noted in May, we should all hope to fail so miserably.

Going forward, Facebook’s path remains unclear; if it can challenge Google (GOOG) for Internet supremacy, its current $31 per share price may, in retrospect, appear to be a bargain. If its continued struggles in adapting to mobile usage – where the company has far less advertising space to sell – impact revenue, or another, flashier, social networking site challenges its dominance, the Facebook IPO may be remembered as the peak in a second dot-com bubble. Fellow Internet stocks Zynga (ZNGA) and Groupon (GRPN) have been hammered as of late, closing the quarter at levels just over half of their own initial offering prices. Zynga appeared to be an early beneficiary of US iGaming legalization efforts; the company has been promoted as a potential online gambling player, an argument I dismissed back in April. Groupon, meanwhile, continues to face questions about the very viability about its business model, one reason why it joined ZNGA on my list of the market’s “five dumbest stocks” in May. Zynga has continued to fall, while GRPN has held on to its depressed share price; but both companies continue to face serious and significant challenges. Facebook, similarly, looks overvalued; but its overwhelming customer base and revenue-generating potential have the ability to keep the stock afloat going forward. Of course, that was the same argument I made back in May. Reviewing the market’s performance is one thing; predicting it is far more difficult.