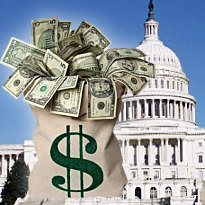 The US federal government has posted its Q1 2012 lobbying disclosure forms and, as usual, they show an awful lot of money being thrown around Washington by companies looking to influence politicians on the subject of online gambling. The disclosure forms aren’t perfect, in that some companies lobby on a variety of issues, and the sum total spent isn’t broken down on a dollar-to-issue basis. To help identify those companies that lobbied purely on the online gambling question, we’ve helpfully marked the others with an asterisk(*).

Of the individual gaming companies showering cash on Congress, Caesars Entertainment once again led the pack, splashing out $886k, a boost on the $784k the company spent in Q4 2011. The next closest individual company on the list was Betfair’s US horseracing subsidiary TVG, which spent $160k, up from $120k in Q4 (which was itself up from $60k in Q3). MGM Resorts anted up $150k* (unchanged from Q4) and Pokerstars (via Rational Entertainment Enterprises) contributed $150k (also unchanged).

Anyway, see you all in three months. Especially you, beleaguered Caesars shareholders, who will likely see yet another million added to the company’s debt load with (as yet) nothing to show for all this schmoozing. Someday Gary Loveman’s prince will come…