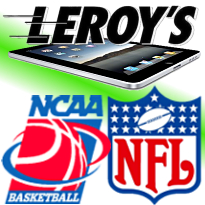 Following the Nevada Gaming Control Board’s approval of the mobile sports betting Leroy’s App for the iPhone in October, American Wagering has garnered similar approval for the iPad version. Leroy’s App began life on the BlackBerry platform, then migrated to Android, but American Wagering’s president/CEO Vic Salerno told the Las Vegas Review-Journal that “the number of iPhone apps downloaded has surpassed the number of Android and BlackBerry apps downloaded combined.” The iPhone version is proving especially popular with males aged 21-40, but Salerno says the app is leading “a lot” of women to open accounts. Salerno’s theory is that women feel better about placing a sports bet from their iPhone rather than having to enter the sausage factory that is your standard Vegas sportsbook (which jibes with that recent poll that suggested women were three times as likely to gamble online than men.)

Male or female, Nevada sports bettors are wagering more on NCAA March Madness games than they do on the Super Bowl. Nevada doesn’t distinguish between NCAA and NBA basketball betting, but the Gaming Control Board’s Frank Streshley told USA Today that the state’s sportsbooks traditionally see a $100m+ jump in basketball wagers every March. In 2010, basketball handle was $129.7m in February, $263.8m in March and $82.6m in April. In 2011, the three-month swing went from $114.3m to $256.6m to $78.2m. By contrast, the Super Bowl’s all-time high handle was $94.5m. Of course, that’s comparing one game to the 67 games of March Madness, but LVH Race and Sports Superbook manager Jay Kornegay says even the first four days of the bracket hoopla tops the Super Bowl. “It’s actually bigger at the beginning of the event than the end.”

Could the National Football League be feeling jealous? SportsBusiness Journal’s Dan Kaplan reported that the subject of gambling came up this week at the NFL owners’ meeting in Florida. The NFL has traditionally taken a zero tolerance stance on anything even remotely involving gambling, and while the idea of the league reversing its stance re betting on NFL games isn’t likely to occur in any of our lifetimes, it may be close to relaxing its prohibition on casinos buying advertising space at NFL stadiums.

The National Basketball Association and Major League Baseball already accept casino advertising, so why has the NFL been so laggard about getting in the game? Especially since several Indian tribes (which coincidentally happen to operate casinos) are already buying stadium ad banners that don’t specifically mention casinos, but everyone gets the point of the ad in a ‘nudge nudge, wink wink’ sort of way. (Sort of like how the NFL point spreads are routinely published in newspapers outside Nevada, despite there being no legal way for residents in those other states to place a wager.) The owners of the two New York teams separately told the New York Post they’d be open to at least considering the idea, which could mean millions in extra revenue annually for each franchise. However, if the NFL did soften its stance, only casinos without sportsbooks would be permitted to advertise.

The NFL’s hypocritical, holier-than-thou position on gambling was perhaps best described by NBCSports.com’s Mike Florio: “We know a lot of people gamble and that they specifically gamble on football and that much of our ratings and revenue come from folks who follow football because they gamble on football but we’re just going to pretend that none of that happens, and for good measure we’re going to act all indignant about any type of gambling, except for those scratch-and-lose tickets because we’ve finally figured out you can make a ton of money off those things.” Amen, brother.