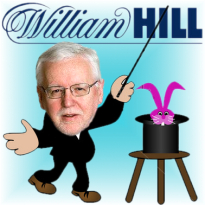 Ralph Topping admits the UK economy is struggling, but the William Hill CEO thinks that might be working in his company’s favor, in that he claims the average wager across his chain’s 2,370 betting shops is just £3-4. “I think you are seeing the working man saying that some of his pleasures are just not going to be foregone. He’s not spending on a new car and might be cutting back on holidays but he needs a bit of brightness in his life.” The company plans to open an additional 30 to 40 shops in 2012, creating some 200 new jobs in the process. (But won’t that help improve the economy and lead punters to start buying cars and taking holidays? Don’t kill your golden goose, Ralph…)

Topping says his company plans to use some of the cash it just reported earning to continue to expand its horizons beyond the UK, from which the company currently derives 92% of its revenues. The company issued a statement that “opportunities are opening up for William Hill to take its expertise into new territories.” Hills acquired Nevada-based sportsbook operator Brandywine in May, launched an Italian online gambling site in July and has applied to offer online services in Spain. On a conference call with investors, Topping reiterated that the company is “convinced we should be expanding” into newly regulated territories. “Ideally, it would be a multi-channel operation, but online is also attractive to us.”

William Hill Online was the star performer in Hills recent results, but the joint venture with Playtech has provided almost as much grief as it has revenues. “We’ve had this colorful relationship for three years [but] it can’t continue in its current form. The freedom for the development of our online business must lie with William Hill.” Topping can imagine a future in which Hills and Playtech continue to work together, but Playtech’s strategic veto “would have to disappear as an absolute,” a position Topping says Playtech acknowledges. In 2013, Hills will have the option to buy out Playtech’s 29% stake in WHO, and Topping expects an executive decision on whether to pull the trigger will be made by “late summer.” If, as is widely expected, Hills exercises their option, a panel of bankers will determine the precise cost of absorbing Playtech’s stake. Topping says he’s already assembled a negotiating team to hammer out the nuts and bolts of a new relationship with Playtech, that is, assuming he can get the Playtech execs to come to the phone.