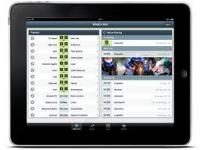 Betfair has relaunched its iPad gambling app today due to a strong demand from its customer base for more tablet-focused features and interface. As reported by the Guardian, the app makes it faster for its users to place bets and deposit and withdraw funds from their account.

The updated app, developed in response to detailed feedback from Betfair‘s tablet-owning customers, comes when the company’s mobile department are stronger than ever. Head of product Anil Bhagchandani confirms there’s now a 60-person team working specifically on mobile, up from 5-10 two years ago, suggesting the investment was positively the right thing to do.

“Not only are people moving over from website to mobile, but there is incremental value from that,” Bhagchandani said. “Customers who were purely website and who then start using mobile almost always stay longer, bet more and have a higher ARPU.”

The app is now live in Apple’s App Store, but Betfair are yet to confirm whether it will make its merry old way to the Android Market for tablets run by Google’s operating system. Judging by what Betfair’s Director of technology, Phil Dixon, says though – it looks pretty likely.

“For most of the last year, we were trying to get apps across each of the platforms roughly as functional as each other and the website,” Dixon said. “We may now take one or two of the platforms and begin to experiment and explore. iPad might explore different usage paradigms, for example, and on Android we may have a bit more flexibility to try different navigation.”

When speaking about the fight between native apps versus HTML5, Dixon added that Betfair is “firm about not taking sides” and confirmed the company will be investing in both.

Do you have the new Betfair app. Let us know if the improvements really are that great…