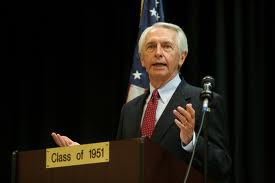 Kentucky Governor Steve Beshear has accused Senate President David Williams of trying to intimidate other senators over the constitutional amendment for casino gambling in the state – a bill that Beshear is expected to release soon with the help of Sen. Damon Thayer.

The accusations occurred after a report by the Lexington Herald-Leader raised questions about whether Thayer should disclose the clients he works for in the horse industry as a marketing and communications consultant.

According to Courier-Journal, during  a news conference, Beshear, said: “I certainly thought that that was a cheap shot that was taken this morning in the newspapers about Sen. Thayer. He’s a fellow of integrity, and he is doing what he thinks is right in sponsoring this amendment to let people vote on it.”

Beshear continued, highlighting that legislators in Kentucky are part-time and infact have other jobs besides their roles – hence Thayer’s situation is not unique.

“We have teachers. We’ve got people that work for universities,” he said. “They vote on the budgets. They have to vote on things that affect the commonwealth generally. And that’s the same thing as this amendment is.”

“I think it’s certainly further evidence of intimidation by Sen. Williams and others who are against this amendment. I think it’s very clear that that’s the case. But Sen. Thayer is going to persevere,” he added.

So how did Williams react to this? Well, through his spokeswoman, of course – who released a statement yesterday evening stating that Williams believes Beshear is making the process too personal.

The amendment proposal will be released “in the next few days”, the governor said.