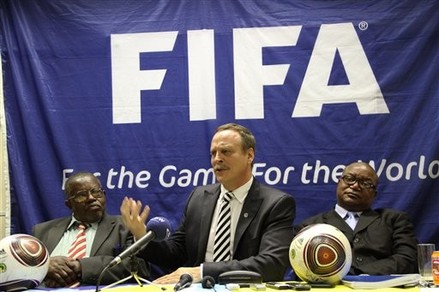 FIFA‘s head of security, Chris Eaton, has been put in charge of breaking up a lucrative underground industry of match-fixing in soccer, a move which has been made by the football governing body to crack down on an illegal gambling market estimated at $1 trillion.

In a report by CNN, Eaton, who was once head of crime agency Interpol, said governments must work together to eradicate the problem as underground gangs may be trying to influence the outcome of high division football games.

“We’re talking about international, transcontinental, organised crime taking advantage of the enormous pot of money available in global gambling is digital money or cash,” he said.

He continued: “Most of this is in the illegal gambling market out of South East Asia. Estimates vary from between $500 billion to £1 trillion so we’re talking about money that attracts organised crime of course because this is digital money or cash.”

FIFA announced yesterday its plans to help fight match-fixing, which will involve: seeking assistance from Interpol; setting up an amnesty for those who provide information; and sending officials around the world to look for clues – like international detectives.

To show the world how serious match-fixing is, and that it is really happening, FIFA also released a document sent by a Singaporean match-fixing specialist based in London – Mr Wilson Raj Perumal – asking an unnamed national association to let in two goals for a £100k reward. They didn’t fail to mention that he is now rotting in jail.

If that message wasn’t clear enough, Eaton said FIFA must send make 2012 the year where people know match-fixing will lead to prosecution. He said: “We need to set a baseline of behaviour where players, referees and administrators understand that if you cross that line FIFA will take action against you and you will not be involved in football again.”

He added that so far there has been no specific allegations relating to any major European competitions, such as the English Premier League, but advised that underground gangs and their reach shouldn’t be taken lightly.

“This is not ad-hoc opportunistic match fixing, this is criminally planned sports results manipulation and it needs the collective commitment of governments. Nothing is immune,” he said.