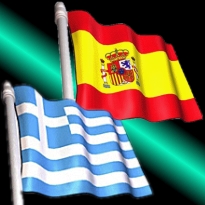 Spain’s new online gambling regulatory system, originally scheduled to take effect Jan. 1, 2012, has been delayed until possibly as late as July 1. On Dec. 30, Spain’s Official State Gazette (BOE) announced that the new scheme would be delayed six months or until regulators issue their first license, whichever comes first. The first round of licenses was supposed to be issued Dec. 20, but the date came and went with no licenses being left under operators’ Christmas trees. Clearly, the shift from a free and open market to a tightly controlled system is throwing up unforeseen problems behind the scenes. The delay means that unlicensed operators will possibly have another six months to serve their Spanish customers, and Spanish poker players will have six more months of unrestricted options.

The ongoing economic turmoil in Greece has disproven the notion that the gambling industry is recession proof. A report on Ekathimerini.com put total revenues at Greece’s nine casinos between January and November 2011 at €382.2m, a drop of 18.5% over the same period in 2010. This is the third consecutive year of decline, having fallen 17.7% in 2010 and 16% in 2009. Another report on Eleftheros Typos Daily put casino bet totals at €2.2b for the year, down a full billion since the pre-economic meltdown days of 2008. Total number of gamblers walking through casino doors fell 5.5% to 2.6m.

The financial shortfall is a blow to the country’s cash-strapped government, whose typical cut of the casino loot ranges from 20-33%. Naturally, those eager for an easy scapegoat are dismissing the fact that Greeks are flat broke, instead placing the blame on cash-strapped Greeks choosing to blow their cash (strapped or otherwise) on “illegal betting websites.” Earlier this month, Evgenios Giannakopoulos, the head of the Committee of Surveillance and Control of Gaming (or EEEP, in Greek) told parliament the annual turnover from all untaxed forms of betting in the country amounts to €7b. Giannakopoulos ominously told the parliamentarians that EEEP (which really ought to come with an exclamation point at the end) might start seeing results from its efforts in tracking down the illegal gaming operators in about six months.