Home / Sports / Rooney gets his horse 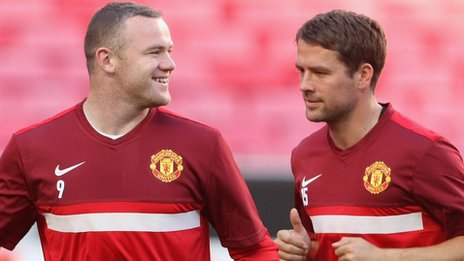 Wayne Rooney has joined a number of his contemporaries by purchasing a racecourse and the colt’s first outing may be as early as May. Rooney and wife Coleen’s horse, which is for the moment nameless, will be trained at the yard owned by teammate Michael Owen, Manor House Stables. The yearling colt by Bahamian Bounty out of a mare called Amazon Beauty is thought to have cost around 63,000 guineas and bred by Roundhill Stud.

Tom Dascombe, who purchased Amazon Beauty for the same price in October, said of Rooney’s horse: “He’s very active and his mother won as a two year old and was third in a Group Three. He could be one for the Tattersalls Millions two-year-old races next season.”

This could put Rooney’s horse in line for a shot at the Manor Farm Stables sponsored Lily Agnes Stakes in May’s meeting at Chester racecourse and it’s the traditional end-of-season day out for Sir Alex Ferguson’s side. Victor Chandler spokesperson Charlie McCann agreed with this assertion, stating: “The colt is bred to make a 2-y-old and given the geography of both the stable and the owner it would be no surprise to see him aimed at the Chester May meeting if he was considered forward enough”

Rooney follows a long line of footballers that have invested in horses in the past. This has included the scouse pairing of Robbie Fowler and Steve McManaman, Owen, Harry Redknapp and boss Fergie, with the horse he part owns taking part in this year’s Grand National.

Now just to name that horse Wayne. How does Lady of the Night sound to you?