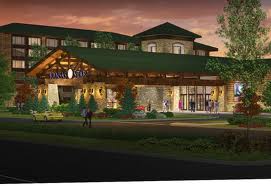 After closed sessions during a commission meeting at Mulvane’s city council chambers, the Kansas Racing and Gaming Commission (the agency that regulates state-owned casinos) granted the casino a conditional certificate to hold a controlled demonstration on Friday. That’s an invitation-only gambling with real money, apparently.

The conditional certificate was approved by Commissioners after a two-hour tour of the interim Kansas Star facility, soon to be a multipurpose events and equestrian centre when its permanent casino opens in a year.

In a report by Kansas City Star, commission chairman, William Falstad, said: “It’s really going to be a very smooth transition when the time comes. It’s going to be a beautiful operation over there. I think it’s really something the way they’re doing that, because it really looks beautiful right now.”

The nation’s highest court – the Supreme Court – has agreed to hear arguments over a lawsuit which aims to shut down Michigan’s Gun Lake Tribe’s casino in Allegan County’s Wayland Township. The Supreme Court will decide on whether that lawsuit can move forward.

In a report by WoodTV, Director of the Indigenous Law and Policy Center at Michigan State University’s College of Law, Matthew Fletcher, said: “It’s unusual.”

Well, he didn’t only say that, he also said what’s strange about it is the willingness of the Supreme Court to take up a petition from a tribe looking to overturn the ruling of a lower federal court. “When that does happen, it’s a big change,” he added.

The decision to hear the case may indicate the justices are looking to reverse the lower court’s ruling, the professor said.

Billionaire car mogul, Norman Braman, was among many at the Miami-Dade College campus in downtown Miami for a forum yesterday, which saw discussions over the idea of bringing casino-style resorts to Miami.

At the meeting he said expressed his strong oppositions to the idea, but those in support of the gambling said these casinos will bring thousands of jobs to the area. Jobs for all!

The bill currently in Tallahassee created by the Florida Gaming Commission, which if passed would regulate resort-style gaming in the state. It’s now in the hands of city leaders and citizens and whether they’d support the idea.