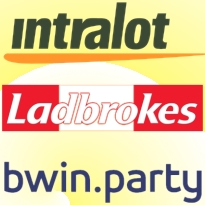 Greek gambling giant Intralot had a rough Q3. While group sales reached €270m (up 5.2%) and earnings were €39.5m (up 1.3%) on the strength of new contracts, the company reported net income of €3.4m, off 71% from €11.7m the previous year. Believe it or not, that’s actually an improvement from the 95% profit drop in Q2. The company is blaming the fall on the necessity of raising payouts to attract penny-pinching punters in these trying times.

As belts tighten across Europe, Ladbrokes has followed William Hill’s lead in offering odds on which country will be first to ditch the Euro as their currency. Ladbrokes has also started offering its customers the ability to wager on the Toronto Stock Exchange and, if you truly can’t get enough Canadiana, you can also bet on the fluctuating exchange rate between the US and Canadian dollars. Ladbrokes is offering bets on individual companies listed on the TSX S&P 60 Index, or on how the overall index performs – in intervals as brief as two minutes or, for those with longer attention spans, over a whole trading day. The possibility of company execs using insider knowledge to game the system might worry the Ontario Securities Commission, that is, if they had any jurisdiction over Lads’ antics.

Widnes, Cheshire-based online sportsbook ApolloBET, which just launched in July, has signed a one-year deal with local pro rugby team Widnes Vikings, entitling ApolloBET to have their logo on the team’s kit and on the stadium boards. Elsewhere, Bwin.party has signed a two-year deal with German handball team THW Kiel that will see the Pwin logo adorn the team’s shorts. We’re seriously resisting the urge to say Pwin execs were trying to get into German handballers’ shorts.