Home / Sports / Horseracing and its big gamble this weekend 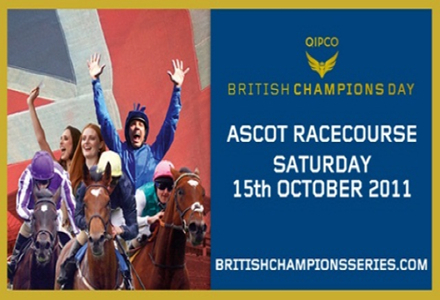 Horseracing embarks on a new era this weekend with the newly introduced Champions Day taking place at one of the world’s showpiece racecourses. Tomorrow’s meet, being dubbed “Britain’s Richest Ever Race Day,” sees horses competing in five different categories with total prize money of £3million available on the day at Ascot. The idea in itself is a good one. Finish off the racing season with a championship to try and work out which horse is the best in each category. The horseracing industry is split on its appeal and even the bookies have their reservations.

Charlie McCann from Victor Chandler agrees with the idea in principle. He told us, “Champions Day is a celebration of the flat season the richest days racing ever staged in Britain and it looks like attracting stellar fields in all of the Championship events.”

One of the main gripes that many have with the day is when it’s being held. McCann is of much the same vein.

“Two weeks after Arc weekend and three weeks before the Breeders’ Cup? Surely if connections want a top class animal to run in two of the end-of-season Festivals it is Champions day that will be the meeting that misses out?”, he said. “Frankel is here but we are not guaranteed to have someone of his ilk every year.”

The five races that are part of the day, all sponsored by QIPCO, are the Long Distance Cup, Champions Sprint Stakes, Champions Fillies and Mares Stakes, Queen Elizabeth II Stakes (Mile) and Champions Stakes (Middle Distance). One of the problems, already alluded to by McCann, is the competition that arises from both the Prix De l’Arc de Triomphe and Breeders Cup meeting taking place either side of the festival. It means that certain people are doubting how long it will be around for.

“It must run for longer than a year but don’t be surprised if its timing is altered to mid- September perhaps even as early as 2012,” McCann added. That may have a knock on effect however; what about the St Leger being incorporated into Champions Day in the first week in September four weeks before the Arc?”

As for McCann’s tips, he said, “Frankel is a cert and I was most impressed with Times Up at HQ last time and he looks tremendous each way value in the Long Distance Cup as long as the ground isn’t too soft.”

Horseracing’s industry is again relying on horses to do the work. When the dust settle, as long as Frankel gets the win in the bag they’ll all retire to the bar uttering “thank fuck for Frankel.”