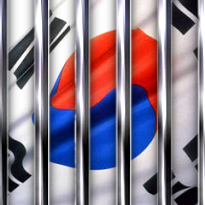 Since April, South Korean authorities claim to have busted 7,090 people for crimes such as distributing pornography, ‘instigating cyber terror’ and operating online gambling sites. (April? Did Korea have its own Black Friday?) The National Police Agency’s Cyber Terror Response Center claims 54 have been arrested and a further 1,800 fined for gambling-related offenses. An estimated 1,000 of those caught up in the dragnet were online gambling software programmers. Total amount of cash seized in the four-month long crackdown came to 4b won (US$3.7m), and gambling-related text-message spam has fallen 22% compared to the same period last year.

Authorities in the Malaysian state of Johor are on a similar vendetta against what the local Deputy Commissioner of Police Datuk Mohd Mokhtar Mohd Shariff (gesundheit!) referred to as an “online gambling syndicate” operating within his jurisdiction. “Even though the state crime index has fallen to 2.11% while street crimes have decreased to 6.07%, I am still not satisfied,” claimed DCP Mohd Mokhtar. The anti-gambling man’s dissatisfaction will likely come as cold comfort to the families of the five Malaysian gamblers who recently drowned after jumping into a river to escape a police raid on a gambling house.

China’s intolerance of online gambling activity is notorious, but a V3 interview with Jeff Kim, COO of local web performance accelerators CDNetworks, reveals that the country’s patchy technology grid puts as much of a crimp in online gamblers’ activities as do the authorities. Kim described China’s internet infrastructure as being a decade behind that of US and Europe, with 20-second web page response times an all-too prevalent phenomenon. Kim detailed “a distinct north and south element” to China’s internet, with several ‘choke points’ arising from poor cooperation between rival internet service providers. But with 450m internet users in a country with a deep-rooted gambling culture, muddling through China’s infuriating infrastructure can be well worth the bother.

A decade behind, huh? Could be worse. Pictured (below left) is New York Police Commissioner William O’Brien out to save the youth of America by smashing one of 2,259 seized pinball machines way back in 1949. The far more recent color image on the right is of Beijing police smashing around 1,200 confiscated slot machines. Now imagine if China’s net infrastructure was 62 years behind the times. See? Things could be much, much worse.