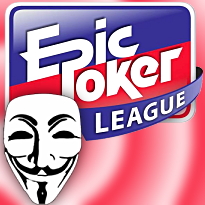 The inaugural event in the fledgling Epic Poker League’s history got underway on Friday at the Palms in Las Vegas. The Pro/Am qualifier Day 1A attracted 92 entrants, of which 14 survived to rejoin Day 2 action on Sunday. EPL members are required to play in at least one Pro/Am event, and 33 members chose to get it over with at their first opportunity. These included Day 1A chip leader Vanessa Selbst, Chris Klodnicki, Andy Bloch, Peter Jetten and Mike Matusow, all of whom ended up comfortably nestled in the top 10. Vegas resident and former Victory Poker CEO Dan Fleyshman sits in 10th place.

Poker agency Check Raise Management (CRM) has offered a lifeline (of sorts) to Jake ‘Topiary’ Davis, the 18-year-old Shetland Islands computer hacker recently arrested by UK police for his role in the LulzSec hacks of the Serious and Organized Crime Agency’s (SOCA) website. Given Davis’ alleged simultaneous use of 16 different machines during the SOCA hack, CRM director Nick Ferro believes Davis “could be a poker talent waiting to happen” and could raise funds for his legal defense by applying his existing skill set to the online poker world. This is either (a) a noble ‘My Fair Lady’ style attempt to transform an anarchist into a capitalist; (b) a pretty lame attempt for free CRM publicity (which we’re enabling), or (c) Ferro is trying to get on LulzSec’s good side to ensure none of Davis’ still-at-large buddies go on to hack CRM’s clients’ bulging bank accounts.

The Shanghai Yaoji Playing Card Co. Ltd., China’s leading card manufacturer, has made its debut on the Shenzhen growth enterprise board (China’s Nasdaq equivalent). As these things go, it was a roaring success, with shares gaining 71.71% to close at 36.06 yuan ($5.60). In May, the company received regulatory approval to make its IPO, from which the company hoped to raise 363m yuan. The cash injection is intended to help the company boost its capacity from 600m to 1.3b decks of cards annually. The company experienced growth of 25.7% last year, capturing 14% of the Chinese market. Card sales in China grew 18.8% over the past five years, but with each Chinese citizen now owning an average of three decks of cards, analysts are wondering how much more capacity for growth remains. Seriously, how many decks of cards do you own?