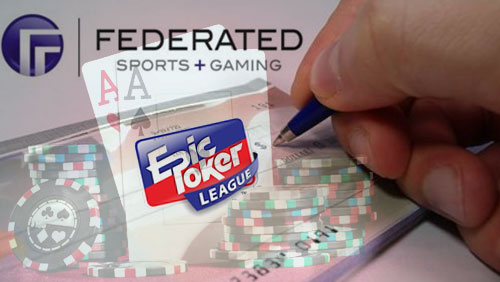 Two years after Federated Sports + Gaming announced that it had filed for Chapter 11 bankruptcy and its assets—including the Epic Poker League brand—were sold to Pinnacle Entertainment Inc., their former Tournament Director Matt Savage finally gets paid “some” of what his company was owed.

Federated Sports + Gaming were culpable for a lot of things but they knew how to choose a catchy title.

I haven’t given The Epic Poker League much thought as of late. The ever-changing sands of the poker industry means I don’t have to. An innovation a week and double helping of scandal keeps my fingers dancing.

Then this came across Hootsuite.

Received a settlement check from @EpicPoker today, not what I was owed but it really was like finding money in the street. #Happy

Matt Savage, the former Tournament Director for the EPL, had received some dosh from the FS+G.

It was time to start thinking about the Epic Poker League again.

Who approached you about working for the EPL and what were your thoughts at the time?

Both Jeffrey Pollack and Annie Duke approached me. At the time I was “hopeful” it would work, for a lot of reasons, but mainly because the players were getting perks and a lot of friends were getting employed. This included poker media and 441 Productions.

In your opinion how successful were the events that you ran?

In my opinion, the events themselves were great. The fields were small but the players that attended were well taken care of.

Do you remember getting the word that the 4th and 5th tournaments were to be cancelled? What was going on during that time?

Yes, we were hopeful that it would resume, but at that point the writing seemed like it was on the wall.

The bankruptcy filings showed that over 100 creditors were owed around $5 million. You were said to be owed $33,333. Did you get that back?

No, I didn’t get the full amount, nor did I expect anything. Everyone that was named in the bankruptcy likely got what (percentage wise) I did, which actually was a nice surprise.

In your opinion how did Federated Sports and Gaming become so debt laden?

The up front costs were massive. From the set, to the television time, production, and added money. I knew the initial outlay was going to be tough to overcome.

Despite its failure. The GPI has gone on to become a great success, so the idea was probably sound. Where, in your opinion, did it all go wrong?

It was a very expensive venture to run. The GPI was, and is, a great concept and I think Alex Dreyfus has done a wonderful job running with it.

What else did the EPL do right?

I think those that were there, working from the start, really felt part of something that could of changed the industry, and hoped it could continue. The players were given added money, free food, hotel rooms, and it was great television. Yes the fields were tough, but it was something that nobody had ever offered the players before.

How did it go so wrong?

It made promises it couldn’t keep. The goals were too lofty, and if it had come to fruition then people would of been happy, but many of us knew there was going to be investors looking for returns that weren’t there.

Who were the people to blame for the downfall of the EPL and why?

I don’t think (like others do) that there is blame to be placed. It was a great idea that didn’t work and that’s all there is too it.

A lot of people blame Jeffrey Pollack for the mess. What’s your opinion?

Again lofty goals that were impossible to attain. Many businesses have attempted to succeed – and failed. Should he take the blame….. Maybe. Should he be crucified for it…No.

What’s your opinion of Annie Duke’s role in the company?

Annie tried hard to do right by the players but had a lot to overcome with her public opinion: tarnished by Ultimate Bet and Daniel {Negreanu} slinging insults and negative comments about EPL—which turned out to be correct—about the failure of the project. Annie doesn’t deserve the blame for the Epic failure.

If Alex Dreyfus was Jeffrey Pollack would things be different today, or was the model always flawed?

I don’t think anyone could of made it work.

Daniel Negreanu said the whole thing was doomed from the start—did you feel this was the case?

Let’s just say all the employees had hoped it continued and most of us knew it could end at any time.

Did Pollack, Duke, or anyone else make money from this doomed experience?

I don’t know for sure but I’m sure all the employees made money because they were working. The players that cashed in the events also benefitted from the $400,000 overlays. You would have loved working those events, Lee, as all the other poker media did. They may have even paid as well as Calvin Ayre?