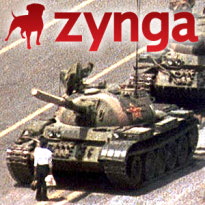 Money Online Global (MOL), a Malaysian-based company that sells a virtual currency (MOLPoints) used to purchase social network game credits, sold US $600m worth of game cards in Southeast Asia in 2010. MOL says its customers in Singapore spend more than customers in India, Indonesia, Malaysia, Thailand and the Philippines, and that 60-70% of all prepaid game cards sold to Singaporean gamers are used to purchase virtual chips in Zynga Poker.

Last week, Zynga announced it was teaming with Chinese internet giant Tencent to launch its first game in mainland China. Zynga City will be a reworked version of CityVille featuring distinctly Chinese architecture, pop culture references and news. Tencent, which has almost 400m active users in China, will initially offer the game in beta form on its Pengyou developers’ platform, eventually moving it to the wider Q-Zone network. The rebranding of CityVille to Zynga City will presumably help establish the Zynga brand in the eyes of Chinese consumers, most of whom will be unfamiliar with the company’s games roster. While Zynga launched a Chinese-language version of Zynga Poker last year, it was (like most of Zynga’s games) accessible only via Facebook, which China doesn’t allow its citizens to access.

The internet restrictions imposed by Chinese authorities are the stuff of legend, but the country added yet another brick to the great firewall last week. Chinese netizens already need to provide ID to access internet cafes, but a new regulation will require hotels, restaurants, libraries and other publicly accessible WiFi hotspots to install software that records and transmits users’ browsing habits to local government watchdogs. The authorities claim to be acting out of a desire to curb online gambling, porn and hacking, but many suspect the authorities’ chief concern is reducing the possibility that the recent wave of internet-fueled regime change that swept through the Middle East might wash up on China’s digital shores.

As if the new regulation wasn’t already going to put a dent in the business done by these establishments, the proprietors themselves must bear the cost of the software installation, which can run anywhere from 20k-60k yuan (US$3k-9k). Not installing the software will result in fines of 15k yuan and the revocation of their business license. The only option to not installing the software is to stop offering WiFi altogether. Currently, the new regulation has only been rolled out in Beijing and other major cities, but the authorities plan to go national in due course, unless the angry reaction thus far demonstrated by Beijing vendors convinces the authorities to either rescind the regulation or pay for their creepy Big Brother toys themselves.