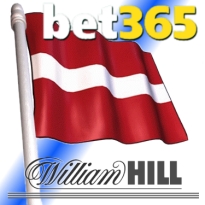 Latvia has published draft amendments to its online and offline gambling laws. Under the proposed changes, prospective online operators would need to provide initial license fees of LVL 300k (€422k) plus LVL 25k (€35k) annually and a 5% tax on gross gaming revenue (GGR). Operators would need to demonstrate LVL 1m (€1.4m) in shareholder capital and be of ‘impeccable’ reputation. Non-EU equity holders could not control more than 49% of an operator’s business. The state would impose ISP blocking of unlicensed websites, block financial transactions with unlicensed operators’ bank accounts, and restrict players to 21 years of age and over. Land-based operators would face similar license fees but their GGR tax would be 15%.

The UK government’s Department for Transport has compiled a list of the top 1,000 websites visited by its bone-idle staff while on the job between January and May this year. Among the usual suspects like the BBC, Google and Facebook are some truly left-field choices, including a south London belly dancing studio, a live medieval role-playing site and www.lynyrdskynyrddixie.com. (Sweet home Manchester?) Oddschecker.com came in at #407, while Bet365 (which not so coincidentally tops Oddschecker’s list) was the only true wagering company to make the list at #788.

Fresh off re-upping as official betting partner of the Scottish Premier League, William Hill have signed on as sponsor of Real Radio’s Saturday afternoon football program Matchday: Live! The show, which focuses on pre-match chats with fans, is hosted by Fraser Thompson and former Scots international Alan ‘Roughy’ Rough. Will Hill’s head of media David Lynn claims to be “really excited” by the deal, possibly because their past sponsorship of Fake Radio programs proved such a letdown.

National Lottery officials in Ireland were left red-faced after a right cockup on Wednesday that saw them accidently inform 45,438 players that they’d each won a Jaguar XK convertible. A website glitch led all those who checked their lucky numbers online to believe they’d won the one €150k ride up for grabs, which likely conjured up images of Lottery officials as Oprah Winfrey with an Irish accent yelling “You get a car! And you get a car!” Er, no, you don’t.