✖ In an apparent attempt to bob and weave around the various US state gambling laws, the Merge Gaming Network has reportedly stopped accepting new customers from Washington (DC), Louisiana, Missouri and Maryland. (Merge previously announced a similar move regarding the state of New York.) Existing account holders from these states will apparently be grandfathered in. Oddly, the state of Washington, the only state in which playing online poker is a Class C felony, didn’t make Merge’s verboten list. Whether any of this provides Merge with any legal protection from the DoJ is highly dubious, but if it helps them sleep at night, go nuts. 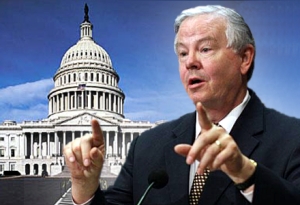 ✖ Speaking at the Poker Players Alliance ‘fly-in’ press conference outside Congress, Rep. Joe Barton (R-TX) (pictured right) announced that his much-rumored online poker legislation is being finalized with the help of the PPA. When the I’s are dotted and T’s are crossed, Barton plans to introduce his bill via the House Energy and Commerce Committee, where Chairman Fred Upton (R-MI) and sub-panel Chairwoman Mary Bono Mack (R-CA) are said to be ‘receptive’ to giving the bill a hearing this summer.

✖ Rep. John Campbell (R-CA), who introduced his pro-poker HR1174 bill in March, also attended the PPA press conference, but didn’t do his cause any favors by stating he didn’t know anything about poker. Campbell apparently intended to demonstrate that he had no dog in this fight, but instead he left himself open to opponents who can now claim he shouldn’t sponsor legislation when he knows fuck-all about the subject. Campbell also stated that if pro-poker legislation was passed at the federal level, he envisioned “foreigners playing on American sites” instead of the other way around.

✖ The Safe and Secure Internet Gambling Initiative released a statement calling for the US gov’t to get behind Campbell’s HR1174 legislation. SSIGI spokesperson Michael Waxman said he would be “shocked if the confluence of media attention and public appeals to regulate Internet gambling doesn’t serve as a sufficient catalyst and motivator for Congress to move on this issue. With more than a thousand operators targeting the U.S. market, government attempts to shut them down one at a time is futile. The commonsense solution is for Congress to heed the increasing calls for legislation to control the activity and capture the significant economic benefits.” The SSIGI is backed by London-based payment processor UC Group, which has spent big bucks to lobby Congress on internet gambling in recent years.

✖ Speaking at the East Coast Gaming Congress (ECGC), New Jersey Assemblyman John Burzichelli implied that the state’s proposed online poker referendum – which Assemblyman Ray Lesniak promised for this November – may now not take place until 2012. “Next year there’s probably going to be a question on the ballot to allow internet gambling. Whether or not New Jersey voters amend the Constitution is up in the air. We came close and we’re going to do it again.”

Also at the ECGC, US Digital Gaming chairman Richard Bronson predicted that the recent DoJ actions against poker had reduced the chances of federal pro-poker legislation happening anytime soon. Bronson sees a brighter future at the state level, saying the governors and legislators he’s spoken to “want this to be a state issue.” That message was countered by Caesars Entertainment’s Jan Jones, who said a state by state solution would mean “we will have lost the single largest opportunity for this industry. If you don’t have that international capability – Europe, Asia – you can’t go in there because you can’t go outside your own state. You lost the worldwide opportunity.”

✖ Tidbit from Law360.com on indicted Black Friday payment processing figure Bradley Franzen’s guilty plea on Monday. As late as this March, Franzen claimed to have been contacted by an unnamed Full Tilt Poker payment processor and told that the gambling outfit faced a $60m backlog of credited funds from US banks.

✖ The recent halting of US operations by ewallets UseMyWallet/QuickTender has now been confirmed as stemming from the Blue Monday indictments. John Mehaffey (@Pokeraddictnet) states that Chargestream Ltd. was the account name under which UMW/QT processed payments via the Feds’ phony payment processor Linwood Payment Solutions. Two Chargestream accounts held in Fortis Bank Netherlands were named in the bank seizure affidavit released on Monday.

✖ Speaking of Linwood, the website home page has been taken down and replaced with the following text:
NOTICE: Linwood Payment Solutions is a Department of Homeland Security Undercover Business set up to identify and prosecute companies accepting and paying out funds for U.S. customers who gamble online illegally. If you have questions regarding funds withdrawn from your bank account for gambling purposes contact the online gambling company you provided your banking information to.

✖ Nevada’s Senate Judiciary Committee has approved AB258, which would enable the state to establish a licensing and regulatory framework for interstate online poker if/when online poker gets the okay at the federal level. The bill now heads to the full Senate for a vote later this week before heading back to the Assembly. The Senate also passed a bill that would block the type of lobbying of state politicians that PokerStars engaged in prior to the introduction of AB258. Previously, lobbyists were not required to report lobbying spend when the state legislature was out of session.