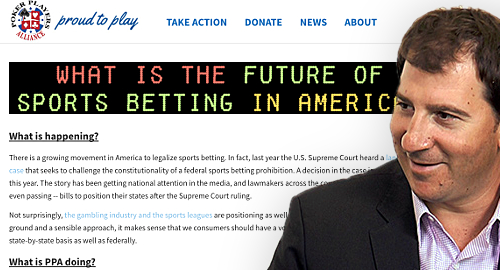 The Poker Players Alliance (PPA) lobby group is bidding goodbye to its longtime leader while looking to broaden its scope to include sports betting advocacy.

On Wednesday, the PPA announced that executive director John Pappas would be stepping down at the end of February. Pappas’ role will be assumed by PPA VIP Rich Muny, while Pappas will remain on the PPA board and will continue to serve in a strategic advisory capacity.

As the PPA’s front man for the past decade, Pappas (pictured) became a fixture at online gambling hearings in both state and federal legislatures. But the PPA is “adjusting to a significant reduction in financial support from the internet gaming industry,” and Pappas told GamblingCompliance that this funding shortfall meant that “I am unable to continue on in my current capacity.”

According to the OpenSecrets.org database, the PPA’s lobbying outlay fell to record lows in the past two years. The international online gambling operators who provided most of the PPA’s funding sharply curtailed their donations following the 2011 ‘Black Friday’ online poker indictments and this decline appears to have accelerated rapidly after 2015.

The PPA said its reduced budget has required the refocusing of its efforts on “cost effective grassroots advocacy.” This includes querying its membership’s “interest on the topic of sports betting and consumer advocacy.”

The PPA has set up a webpage to gauge its members view of the current debate surrounding legal sports betting and whether the PPA should mount a parallel campaign to organize sports betting fans.

As part of this shift, the PPA is asking members to fill out a 10-question survey, which (among other things) asks whether the PPA “has a good opportunity to take the lead in the push for legalized sports betting” and if that leadership position would improve “the PPA’s ability to promote legislation licensing internet poker.”