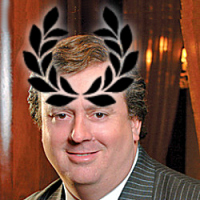 Caesars Entertainment CEO Gary Loveman has caused a stir with his CNNmoney.com op-ed “Online poker: Legalize it!” In the widely distributed piece, Loveman describes the Black Friday indictments as an “opportunity” and suggests that “legitimate” gaming outfits (such as, ahem, his own) and the federal government “seize the moment.” Gary helpfully offers suggestions on how best to carpe this diem, the most important being the enacting of a federally regulated poker environment. The phrase “only federal legislation can” is sprinkled liberally throughout the piece, yet curiously Gary makes not a single reference to his company allegedly helping to torpedo New Jersey’s intrastate-poker legislation earlier this year.

Gary goes on to compare the US prohibition against online poker with the country’s infamous experiment with alcohol prohibition in the 1920s, saying that, in both cases, “business is being diverted from legitimate, respected companies that employ thousands of people to fly-by-night, underground (and in this case, foreign) operations.” For the record, outside the US, international companies like PokerStars are viewed as perfectly legitimate operations that also employ thousands of people. And unlike Gary’s “respected” company, PokerStars isn’t currently carrying over $18 billion dollars of debt. Gary also insists that future federal legislation be poker-only – no sportsbetting nor the slots and table games on which his land-based casinos depend so heavily to keep Caesars’ debt levels below $20b. It’s also worth wondering whether anyone should heed gaming industry advice from the man who famously turned down the chance to have a presence in Macau. Did we mention Caesars’ $18b debt?

Meanwhile, a Rasmussen national telephone survey conducted April 18-19 reveals that just 7% of respondents claimed they were “very closely” following the Black Friday indictments. That figure corresponds neatly with the 7% of US internet users that played poker online in the past year. Despite the massive publicity Black Friday has generated, just 20% of those polled claim to be even ‘somewhat closely’ following the subject. The poll also shows that 61% of US adults favor legalizing cash poker games in one’s home. Online poker, however, was supported by 41% of US adults, opposed by 42%, with 18% undecided. But those ‘opposed’ numbers are heavily skewed by people that admitted they either (a) never go online or (b) do so infrequently. Regular internet users are far more in favor of letting ‘em play. In other words, progress is being impeded by the ignorant and the aged. Typical.