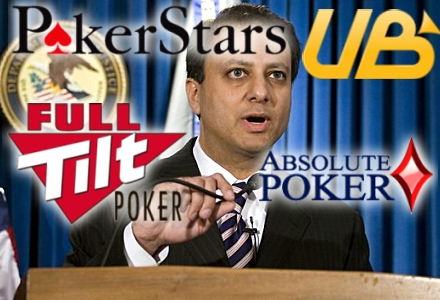 This story is obviously evolving rapidly, so bear with us as we try to summarize the latest casualty figures. Meantime, here are links to the main Department of Justice documents:

READ THE DoJ PRESS RELEASE ON THE INDICTMENT

First off, looks like Sen. Harry Reid’s going to get that blackout period after all… (Sorry, too soon?)

✖ In the day’s least surprising news, those US land-based casino giants are all disavowing the online poker deals they struck just weeks ago. Wynn Resorts says it has “terminated” its deal with PokerStars, while Fertitta Interactive says its deal with Full Tilt was always contingent on the poker company getting a US gaming license, and so the deal has thus “expired.” We take that definition as having nothing to do with anything time-related, but more to do with the ‘breathing its last’ connotation.

✖ Full Tilt’s CEO Raymond Bitar has released a statement saying he is “surprised and disappointed by the government’s decision to bring these charges,” although he is looking forward “to my exoneration.” In the meantime, Full Tilt recognizes that it “must suspend ‘real money’ play in the US until this case is resolved.”

✖ PokerStars has also suspended US real money play and changed the default URL on its associated sites to PokerStars.eu. Money transfers have also been disabled. ESPN’s Andrew Feldman is speculating that the affected poker sites will shut down across the globe within 48 hours.

✖ Chad Elie, the payment processing figure (and former Intabill staffer) arrested in Nevada, appeared in US Magistrate Court in Las Vegas on Friday, and was subsequently released on his own recognizance (and, presumably, that of his FBI shadow) with a hearing scheduled in a New York court for this Tuesday (19th).

✖ Richard Perkins, the former Nevada politician and current PokerStars lobbyist, claims the push to pass the PokerStars-sponsored intrastate poker legislation AB 258 will soldier on despite the day’s events, as the bill “is not just about this company, it is about the policy of this state.”

✖ The Poker Players Alliance released a statement saying, in part, they were “shocked” by the DoJ’s actions. The PPA was good enough to note that “online poker is not a crime” but that’s not exactly what the DoJ is alleging here.

✖ Former Intabill head Daniel Tzvetkoff – who handled hundreds of millions for PokerStars, Full Tilt and others, plus allegedly funneling millions more into his own pockets — is being fingered as the canary singing loudest into DoJ ears. (Australia’s Courier Mail has a feature detailing the payment processing boy-wonder/Icarus and his subsequent fall from grace.)

✖ The scope of the internal company emails the DoJ has in its possession appears formidable. Our current personal favorite is the Sept. 29, 2009 message in which John Campos, the SunFirst Bank vice-chairman arrested in Utah on Friday, refers to a lawyer warning Campos of the risks involved in processing online gambling payments as a “wet blanket.”

✖ Among the details revealed in the emails is the wide variety of e-commerce websites used by the poker sites to handle transactions, including sites purporting to sell flowers, pet supplies, golf clubs, bicycles, clothing and/or jewelry. There was also a Green2YourGreen site that claimed to be a “direct sales” business in which consumers purchased enviro-friendly household products for resale to other customers in return for commissions. The site allegedly went as far as to include bogus ‘testimonials’ from satisfied customers re the green products. A DoJ sting apparently had two gamblers send queries to these phony co’s customer service re the charges that appeared on their bank statements, only to receive replies sent from PokerStars’ customer service.

✖ Worse, these emails directly indicate the poker companies’ complicity in these schemes, with PokerStars documents admitting that they were employing company names that “strongly imply the transaction has nothing to do with PokerStars” and that they used whatever names “the processor can get approved by the bank.”

✖ Is anyone buying the DoJ claim that these poker companies took in “one-third or more of the funds deposited by gamblers” via the rake? Makes the French regulated market look positively generous.

✖ It remains to be seen how foreign governments will react to the DoJ’s call for arrests of the indicted figures living outside the US, and for assets abroad to be seized.

✖ Finally, a big thumbs-down to FBI Assistant Director-in-Charge Janice K. Fedarcyk, who decided to pepper her statement to the press with poker-related terminology. To wit: “These defendants … tried to stack the deck. They … bet the house that they could continue their scheme, and they lost.” Epic humor fail, Jan…