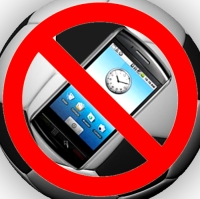 FIFA’s Director of Legal Affairs Marco Villiger says ‘active measures must be taken’ to combat the spread of match-fixing. Speaking Friday at the Sports Funding, Sponsoring and Sports Betting Congress in Zurich, Villiger singled out live bets as “a problem. We have to think about whether we should continue to offer such bets.” UEFA general secretary Gianni Infantino called the live-betting issue “something we will certainly address in the next discussion we’ll have with betting operators.” Sounds like someone’s overcompensating for the black eye FIFA received after not paying closer attention to warnings about those two international friendlies in Turkey, a situation that Infantino now says “smells bad from miles and miles away.”

Infantino admits professional football’s early warning systems were designed to detect suspicious betting patterns on final results, not on the myriad options of in-play betting. “It’s something we didn’t really focus on too much … The criminal organizations are also getting more, let’s say, ready to tackle the measures we have introduced.” Villiger did his best to insist that the leagues were engaged in a fight against illegal betting, not against bookmakers. Fair enough, but companies with booming mobile betting operations would obviously take a hit. And as the European Sports Security Association’s Khalid Ali pointed out, by banning live betting, the leagues would only be “creating a black market for these kinds of bets.” The prevention, control and sanctions related to match-fixing are scheduled to be discussed further when the Congress reconvenes Saturday.

MALTA PUNCHING ABOVE ITS WEIGHT
The Maltese media are puffing out their chests this week after European Union officials described Malta as “Europe’s gambling hub.” The occasion was the European Commission’s release on its long-awaited Green Paper on online gambling, which showed that the EU’s smallest member had somehow managed to register the largest number of online gambling companies. An EU official described Malta’s appeal as two-fold, in that it offered both “a good functioning regulatory system” and “favorable tax incentives.” (Suck it, France!) Then, just as Malta let her guard down, the same EU official dismissed the notion of applying Malta’s model to the rest of the EU, as Malta was “not a normal country.” We like to think that the official then reached in, pulled out Malta’s heart, and took a big bite. 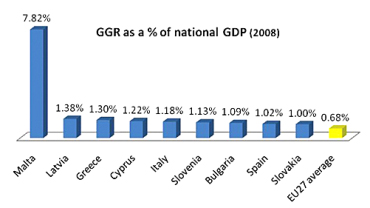 Figures from 2008 published in the Green Paper show that Malta had registered some 500 online gaming companies. As this chart at left shows, Malta’s reliance on the gaming sector cannot be understated, as gross gaming revenue accounted for 7.82% of total GDP – 11 times the EU average. Small wonder that Malta is taking particular interest in what the EU’s Green Paper consultation produces after it closes at the end of July. Despite Commissioner Michel Barnier’s insistence that the EU was entering this process with “no pre-determined views,” Malta feels it has good reason to fear possible curbs on its combination of good regulation and favorable taxation. We hope not. It would be like finding a real live unicorn, then killing it.