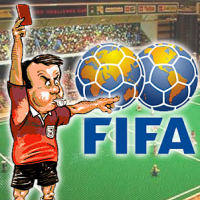 The Brazilian Football Confederation (CBF) has been fined 160m Reals (US $100m) for its role in an infamous match fixing scandal. The scandal, first unearthed by Veja magazine, involved a gang called the Whistle Mafia that conspired with referees to fix 11 matches in 2005. Now a Sao Paolo court has ruled that CBF officials acted in bad faith by attempting to drag out the legal process while minimizing charges against and punishment of the accused. The timing of the fine is unfortunate, what with Brazil serving as host for the next FIFA World Cup, and CBF being a FIFA member. Regardless, CBF lawyers are dismissing the court ruling as banal, and the case itself as old news. Remember, folks… not for nothing is FIFA’s logo a giant pair of balls.

Okay, how about a more recent FIFA scandal? Across the Atlantic, FIFA officials are being accused of failing to act despite warnings that something wasn’t right with a pair of international friendlies that took place in Antalya, Turkey on Feb. 9. The matches, Bolivia v. Latvia and Estonia v. Bulgaria, featured seven goals, all penalties. One penalty was even ordered retaken after the player missed the net on his first attempt. Despite a seeming lack of interest in the stands (only a couple hundred fans turned out in a 7,500-seat stadium), a reported €5m was wagered on the outcome of the Estonian match alone. The Independent reports that one leading UK bookmaker took the game off the board pre-kickoff after suspicious betting patterns were observed coming from the Asian market.

The two matches were organized by a company in Thailand, Footy Sports International, despite its connection to a Singaporean national with links to a convicted match-fixer. Estonian football officials became even more concerned when they met their referees. The Footy Sports folks had claimed the refs were Bosnian, but the referees introduced themselves to the Estonians as Croatian. The Estonians contacted FIFA about their concerns, but were told to go ahead with the match as there was “no firm evidence” to justify canceling it.

FIFA is justifiably coming under fire for ignoring the Estonians’ warnings, but what should be more alarming is the apparent lack of interest in vetting companies that are allowed to stage international matches under the FIFA banner. FIFA is now proposing that organizers give them two-months notice on just who will be refereeing international matches. It’s too bad that online gambling will likely be painted as the culprit in this story, especially when FIFA’s own commitment to integrity takes a back seat to its desire to generate revenues.