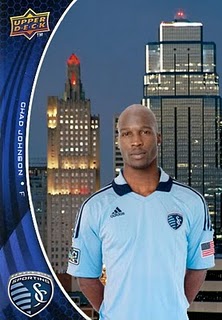 Just because the NFL is screwing everyone over with the NFL Lockout, doesn’t mean Chad Ochocinco should step out of the spotlight he’s become so accustomed to. In fact, Ochocinco is trying to prove that he’s more than just a football player, he’s also a footballer.

Chad Ochocinco made headlines when he attended a four day try out for the Sporting Kansas City MLS club and now he’s making more headlines after the team asked him to play in a reserve game against a local team.

At the very least, there should be more fan support at this meaningless game, and Ochocinco has bought himself some “extra time” on the soccer field.

For those who don’t know, Ochocinco, or Chad Johnson as he was known in highschool was actually soccer player first before he turned to football. With his great size and his blinding speed and amazing athletic abilities, Ochocinco does have all the tools to be a good soccer player, except for the fact that he hasn’t played the game in over a decade.

Still, Ochocinco has come a long way from the first day of tryouts when he was sucking wind and looked like a deer in headlights on the pitch.

At least we’ll be able to cheer on and NFL receiver in something other than routing for Hines Ward on Dancing With The Stars season 12.