Home / Sports / Can the Festival get any better? 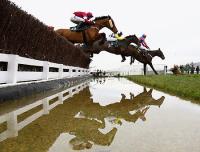 As the Cheltenham Festival enters the penultimate bend on the day of the patron saint of Ireland, the four day long meet has more than lived up to its billing as the most exciting meeting on the horseracing calendar.

After Ruby Tuesday and the Irish showing just where the luck and, more importantly, ability lies, today has quite a lot to live up to. The person who’s having the hardest time of all is arguably trainer Nicky Henderson.

Heading into this week many were billing his grapple with fellow trainer Paul Nicholls as one of the clashes to look out for. Though, ever since Binocular bowed out of Tuesday’s Champion Hurdle things have been far from rosy for the trainer and he’ll be hoping it’s all change today.

The Ladbrokes World Hurdle is the big race on St Patrick’s Day and many seem to be backing a horse that can boast a winning combination from earlier this week, Big Buck’s. Granted, some of the backing is coming from the fact that it’s ridden by Ruby Walsh and trained by Nicholls, and that he’s not lost in 10 starts, but this is Cheltenham so expect the unexpected. The main challenge will likely come from either Grands Crus or Fiveforthree.

In the first race of the day, the Novices’ chase, Wishfull Thinking is well backed, with Tony McCoy’s ride Noble Prince also looking good. Pertemps Final, with a field of 24, features the strongly fancied David Pipe trained Chartreux. Later on in the day another Pipe trained horse, Junior, might also do the business in the Kim Muir Challenge Cup.

The Festival gets harder to predict by each passing year meaning that any predictions are likely to be hard to take much notice of. It does mean that it makes the four-day sojourn all the more exciting.