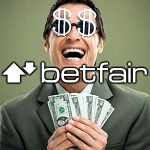 Friday’s initial public offering by betting exchange Betfair is being hailed as an unqualified success, and one of the most significant IPO’s in UK history. The shares, which opened at £13, rose briefly to £15.56 within the first hour of trading, before closing out the day at £15.5.

The 16.2m shares put up by company principals were eagerly snapped up by institutional investors, whose ranks included private equity firm New Smith. The irony here is that New Smith counts among its founding partners one Paul Roy, chairman of the British Horseracing Authority, who has of late treated Betfair (at least, in the press) like something that dropped out of a nag’s backside on the way to the stable. (The conspiracy theorist in us is desperately hoping that this is some Trojan Horse ‘just get us inside and we’ll bring their fooking walls down’ strategy, but somehow we doubt it.)

Regular Joes will get an opportunity to get in on the action on Oct. 27, when the issue becomes unconditional. Depending on how the stock behaves, a further 1.8m shares may be thrown into the arena over the next 30 days, according to the terms of the firm’s overallotment option.