Home / Business / Stock it to me: Betfair fancies itself, Moneybookers plans IPO 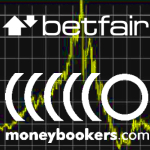 With the announcement of Betfair’s initial public offering at £11-14 per share, analysts are doing a bit of a headshake. After all, the math suggests that Betfair believes it’s worth the staggering sum of £1.5B, or some 35 times its £44.7M 2010 earnings before interest, taxes, depreciation and amortization (EBITDA). By way of comparison, the more mainstream Amazon.com puts its own valuation at a mere 26 times EBITDA, and the internet retailer’s future doesn’t hang on the whims of capricious governments who may or may not find God overnight and summarily decide that gambling’s gotta go.

Meanwhile, this ‘urge to go public’ virus appears to be spreading, as London-based online-payment firm Moneybookers is reported to be going down the IPO route. The company was almost sold last year by its parent, Investcorp, a Bahrain-based investment bank, but has now enlisted Morgan Stanley and Jefferies to give it a market-friendly makeover ahead of any public offering. With net profit in 2009 of almost €17M Investcorp imagines the firm is worth some €500M, and plans to float about a third of the company’s shares.