Hardcore riot dog has nothing on Chinese gambling dog

There’s this weird phenomenon happening at those Greek riots, specifically, the presence of the ‘hardcore riot dog’ who seems to be at the forefront of all the action. Our dearly departed Bo Da Dogg would have been proud.

When we first translated Bodog to Mandarin, we had to pick a translation for Chinese, and as it’s a character based script, we went with two characters that basically say ‘Gambling Dog’ and are pronounced ‘bo gau’ in Mandarin. Pretty amazing when you think that the Bodog Group was founded in 1994, the Chinese Year of the Dog… and ‘bo’ means gambling in Mandarin. Coincidence? I think not. Bodog was destined to be a Chinese language powerhouse. 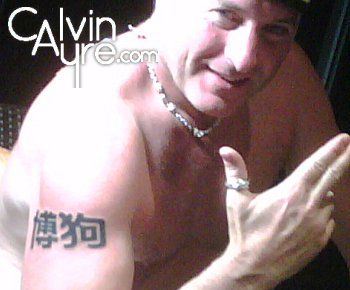 I have these characters now tattooed on my arm to demonstrate how serious Bodog is about the global Chinese language market. The three biggest global gaming languages are (in this order) Mandarin, English and Spanish. Next would likely be (not in order) German, Russian, Indian, Arabic, Portuguese (because of Brazil) and maybe Japanese.

The Asian BodogBrand.com licensee operates in the Phillipines under a gaming license from the Cagayan gaming board, using the domain Bodog88.com. They offer services in English and Mandarin to markets all over Asia. But whatever language you speak, my tattoo says it all.