Home / Business / Do The Right Thing: an unofficial history of Mohawk rights

The Mohawk residents of Kahnawake, Quebec have endured significant hardships over the centuries, much of it at the hands of white men. As a man of undeniably pasty complexion, the behavior of many of my forebears fills me with a degree of shame. Perhaps many of you reading this feel similarly guilty twinges when this subject is broached, while others rationalize that these events are ancient history which have no bearing on the world of today. But have things really changed all that much? Would you be shocked if I told you that Mohawks increasingly believe stepping over the border into Canada can be a hazardous, even fatal activity?

Fatal to their wallets, I mean. See, Canada’s economy is booming – the Loonie (Canada’s golden dollar coin) is at parity with the American dollar, interest rates are creeping up and economists are using the word inflation a whole lot more. As a result, Mohawks are paying more for goods when they shop in Canadian stores. And all because the rest of the world has decided it wants to live like Americans. That means buying the same shit that America buys, and most of what America buys nowadays comes from China.

Now, China has a lot going for it, including plenty of cash, brainpower and a badass work ethic. Where China comes up short is their lack of sufficient natural resources to keep all their factories going. To rectify this problem, Chinese officials are traveling to resource-rich countries with steamer trunks full of cash and leaving with signed contracts for energy, minerals, commodities and whatever else they need to keep those factories back home humming. And when China thinks of resource-rich countries, the name at the top of their list is Canada.

Seriously, if Chinese industrialists were a bunch of trailer trash rednecks, Canada would be their Wal-Mart. Canada offers one-stop fuel shopping for natural gas, coal and has petroleum reserves to rival Saudi Arabia (even if it is a right bitch to get out of the ground). Canada is also the world’s largest producer of zinc and uranium; it has huge swathes of fertile farmland and some of the world’s oldest and largest forests.

There must be moments when China looks at Canada and gets really pissed off. In square mileage terms, the countries are almost identical in size, but for every citizen of Canada, there are some 39 Chinese. Combine that with the abundance of Canada’s natural resources and the disparity seems all the more unfair. Canada is like a guy with 39 smokin’ hot porn-star girlfriends, while China is a guy with just the one wife, and her tits ain’t what they used to be.

America, too, is casting envious glances Canada’s way. When the borderline was first established at the end of their Revolutionary War, the Yanks thought they’d suckered the British into settling for North America’s frozen arse end. By 1812, they’d realized the huge blunder they’d made, and, being Americans, their instincts told them the best way to rectify the situation was through the use of force.

So the Yanks invaded Canada, and things went okay, right up until they ran into the Mohawks on the Canadian side of the border. After one fight, according to the British commander on the scene, the Mohawks “beat the American detachment into a state of terror, and the only share I claim is taking advantage of a favorable moment to offer them protection from the tomahawk and scalping knife.”

Emboldened, the British pushed the Yanks back, and things went okay, right up until they ran into the Mohawks who lived on the American side. And it’s interesting to note that once Mohawks from either side of the border realized they were waging war against each other, they collectively said ‘fuck this noise’ and went back to their villages, leaving the white guys to their business.

(That’s the thing about the Mohawk nation. Some Mohawks may be north of the 49th parallel, others south of it, but it’s all the same nation to them. In this respect, they’re sorta like the Great Lakes – they’re just there. You can draw a line on a paper map that appears to cut them in half, but unless your name happens to be Moses, the water doesn’t actually part.)

Anyway, the weird thing about the War of 1812 is that everybody claims to have won it. The British had always viewed the war as a sideshow to their efforts at defeating Napoleon in Europe, so they were content to restore the pre-war status quo and get back to not flossing. America (not yet 40 years old at that point) claimed that simply by not losing any territory it had taken from the British during the War of Independence (land that the British had taken it from the Indians) it had established its rightful place at the world’s table of nations. Even the French claim to have won it, mainly because their egos won’t allow them to believe they lost any war, even ones they didn’t really have any role in. (Other celebrated French triumphs include the sinking of that Greenpeace boat, the War Against American Cyclists and that “I fart in your general direction” tussle with King Arthur in Monty Python & The Holy Grail.)

Sadly, there doesn’t seem to be much doubt amongst historians as to who lost the War of 1812. The Mohawks, who’d once ruled a territory the size of France, were now divided into isolated little pockets in New York, Ontario and Quebec. And for the next century or so, America and Britain/Canada continued to chip away at these islands of Mohawk territory, often with little or no financial compensation. 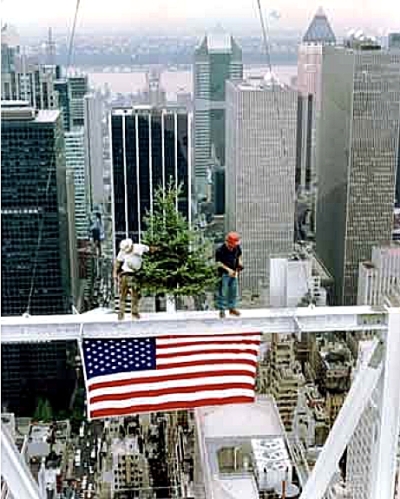 So you might expect the Mohawks to bear some kind of deep-rooted resentment of all things Canadian and American. Instead, they volunteered their services as high ironworkers, starting (appropriately enough) with a bridge connecting Mohawk land in New York to the Canadian side of the St. Lawrence River. Mohawks quickly won a reputation (again) for efficiency and fearlessness, and the public was fascinated by the seemingly devil-may-care approach Mohawks brought to their high-wire act. (This legendary nimbleness is primarily based on genetics, i.e. the Mohawks’ enormous ‘nads give them a lower center of gravity and therefore a better sense of balance than their small-balled caucasian co-workers.)

From the 1890’s to the present day, Mohawks have helped construct many landmarks of America’s cities, from the Chrysler Building in Chicago to New York’s Empire State Building and World Trade Center. (Former Mohawk chief Joe Norton himself worked as a ‘skywalker’ in his youth.) But however pivotal Mohawk workers were in building America’s cities, their giant balls were to play an even bigger role in rebuilding the status of the Mohawk nation.

In 1927, a Mohawk steelworker from Kahnawake named Paul Diabo was turned away at the American border by U.S. Immigration authorities. Unable to get to his place of work, Diabo took a detour into a U.S. court and fought for the treaty rights of Mohawks to travel across the US/Canada border unimpeded. The court sided with the Mohawks, and the decision was upheld on appeal the following year. Today, Mohawks issue their own passports that are recognized by both U.S. and Canadian border officials.

The legitimacy of treaty rights was confirmed in 1995, when a federal judge ruled that New York State courts had no business interfering with the decision of a tribal court on a purely internal matter. This decision was upheld on appeal in 2000.

The belief that the Mohawks represent a separate and sovereign entity was reinforced when the state of New York decided it wanted to get into the casino business. Trouble was, New York’s constitution specifically prohibits it from operating casinos within its borders, so they struck a bargain with local tribes to build the casinos on Indian land. These casinos’ ongoing operations are a daily affirmation that the state constitution has no authority on Indian turf.

So we see that some Indian treaties are recognized by the courts, and even by politicians when they find it to their benefit. There are many other treaties, agreements and deals that Dutch, French, English, American and Canadian officials have made with Mohawks, many of which were never rescinded, superseded or bargained away. Honestly, if all these pacts were honored to the letter, there’d be Mohawk faces on all our currency (as in the image at the top of the article).

But the Mohawks aren’t asking for that. (At least, not yet.) All they really want is to have the agreements they signed in good faith to be respected by the other parties involved. You know, that curious tribal concept of ‘a deal’s a deal’. For example, if Canada were to recognize all Mohawk treaty rights, large chunks of suburban Montreal would revert to Mohawk control. This would effectively make Mohawks landlords of these areas, but because managing this additional territory would be a serious administrative headache, the Mohawks are instead attempting to negotiate a financial settlement with the Canucks (the governments in Quebec and Ottawa, not the NHL team). Then maybe, just maybe, Kahnawake residents and other native peoples in North America will be able to pay those higher prices that are now being posted in Canadian stores (due to the rise in value of the Canadian dollar from the benefits to the Canadian economy from all the natural resources stolen from the natives and then sold to China).

That said, if the Mohawks ever do end up with the rights to pick the faces on the continent’s legal tender, I have a small favor to ask. Since enough people already think I’m a bit of a lunatic, is there any way I can get my face onto the Loonie? 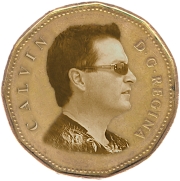