Home / Sports / European football gets its mojo back 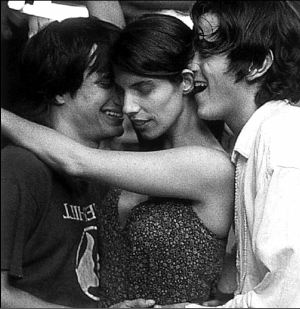 I’m not quite sure what’s happened to football this year – and by football I mean the original beautiful game not the helmet, pads and cheerleaders fest that is NFL – but throughout Europe it has suddenly become exciting again.

Take the Premier League. This is always a two-horse race between Manchester United and any one of Chelsea, Arsenal and Liverpool. This year, though, United and the two London clubs are duking it out for the title in the most exciting three-way since Y Tu Mama Tambien.

Arsenal, despite losing to both rivals twice this season are somehow still in the running, although they shot themselves in the foot again by drawing 1-1 draw at Birmingham to fall four points adrift of the leaders. United, who beat Bolton 4-0 last night, moved a point ahead of Chelsea, who tonked Aston Villa 7-1 yesterday, but with the top two meeting next weekend, one of them, if not both, will drop points – and open the door to Arsenal, who have had more second chances than OJ Simpson, which is perhaps why they are nicely-priced with Bodog at 11/2. Do two many cooks spoil the broth. Not bleedin likely: with six games to go the pot is bubbling nicely.

Over to Italy, where they may know how to cook up a nice Carbonara but when it comes to football, everyone could save themselves a lot of time and money by handing the Scudetto to Inter Milan at the start of every season. Oh, hold on, that is what they do, isn’t it? After all, they’ve won at a canter for the last four years in a row, thanks to oil baron owner Massimo Moratti ploughing squillions into the transfer kitty every summer whenever he gets bored of raising petrol prices.

Except this season things are looking very different because Inter have been distracted by reaching the business end of the Champions League for once. So instead of steamrollering sides as is the norm at this time of year, they have managed to win just two Serie A matches in nine. Yesterday’s defeat to Roma allowed the Giallorossi to move within a point of them and AC Milan will move level with the Rome outfit with a win over lowly Lazio today. And yet Milan are 4/1! So it’s actually a close-run thing – until of course the latest refereeing scandal rears its head and they hand the title to Inter again.

In Germany, the days of one team dominating the football landscape are long gone. The German championship has been won by three different sides in as many years and although Bayern Munich, who face Man Utd in the Champions League this week, have by far the strongest squad – they have slipped to second place after losing their second Bundesliga match on the bounce. FC Schalke have moved two points clear at the top, thanks to a 2-0 victory over early pace-setters Bayer Leverkusen, who are five points back.

Lyon killed any semblance of footballing competition in France for seven long years before Bordeaux restored some sanity last season, and this time around there are six – yes SIX – sides still in with a shout of winning Ligue 1. Bordeaux are still favourites, as they share top spot with surprise contenders Montpelier and boast a crucial game in hand. However, Les Girondins may have taken on more than they can chew this season as they were gunning for three competitions before losing the French League Cup final to Marseille at the weekend.

In the league they have mustered just three wins in nine league matches, and face the added pressure of Lyon – who are two points behind them in the title race – in the Champions League quarter-final in midweek. The other sides very much in the race for Le Championnat are Auxerre, who are just a point behind the joint leaders, Lyon, who are two behind, Marseille, three points back, and li’l Lille, who are still hopeful in sixth place – five points beneath top spot. Ooh la-la!