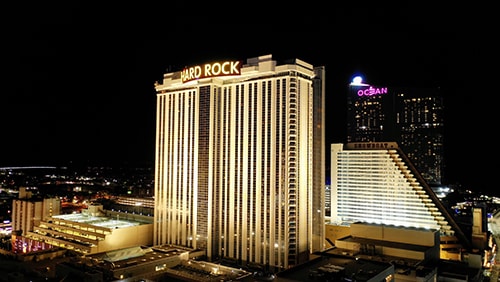 It’s been a long 12 months, but the wait was probably worth it. After Virginia began whispering about the possibility of opening its gambling industry last year, it didn’t take long for casino operators, including Hard Rock International (HRI), to pick up on the chatter. It started working out a way to get in on the up-and-coming gambling scene in the state, and teamed up with Bristol Resort and Casino to bring its large, iconic guitar to the city of Bristol. Now, a year later, HRI’s wheeling and dealing have paid off.

HRI has officially been chosen to develop a massive casino resort in Bristol, which will be located at the site of the former Bristol Mall. The Bristol City Council made its selection without having to waste too much time or energy putting a list of candidates under the microscope. When the city announced this past April that it was prepared to accept submissions from casino operators looking to bid for a casino there, HRI was the only one to have responded.

At that point, there was a very good chance that HRI was a shoo-in for the rights to the development, but there was another hurdle to jump. City residents of Bristol, as well as of Danville, Norfolk and Portsmouth, had to vote on whether they wanted a casino in their backyard and, at the beginning of November, all four cities approved a ballot entry to authorize the properties. 71% of Bristol residents signed off on the measure, giving HRI a lot of local community support.

Coming up will be a $400-million investment by HRI to convert Bristol Mall into the new Hard Rock Hotel & Casino Bristol. The shopping center had closed in August 2017 and later sold to a pharmaceutical company, Par Ventures, that had plans to turn it into a cannabis production facility, as reported by local media outlet WJHL at the time. Those plans are unlikely to see forward movement, but Par Ventures is said to be involved with HRI in the development of the resort, along with The United Company, a local entity that had its start in the coal industry decades ago.

The new gambling venue will include a two-story gaming space, as well as an outdoor entertainment facility that will be able to hold up to 20,000 people. There will also be a 3,200-seat indoor entertainment area, seven dining options, four bars, retail spaces and a convention center. No resort would be complete without a hotel, so HRI is throwing in a 350-key hotel to make it complete.

Once everything is up and running, there will be 2,000 new jobs created, which will be significant for Bristol. The U.S. Census Bureau indicates that around 20% of the city’s residents lived below the national poverty line last year, with an average household income of $37,904. This is almost half of the national average, but HRI insists that it plans on providing an annual average salary of around $45,000 to its new workforce.

Rollout of sports gambling in Virginia may have hit a snag
Erik Gibbs
17 December 2020
.