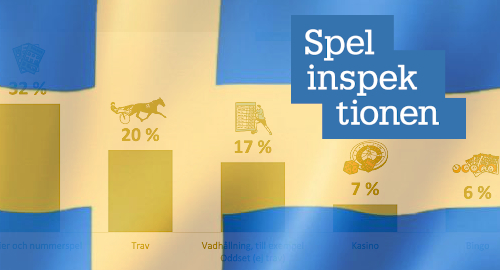 Sweden’s gambling regulator is mounting an awareness campaign for its Spelpaus self-exclusion program after concluding that Swedes had increased their gambling activity during the pandemic lockdown.

This week, Sweden’s Spelinspektionen regulatory body announced a new campaign to remind the nation that there was a system in place to prohibit access to gambling products. Around 58k individuals have to date signed up for the Spelpaus program, which launched in tandem with the country’s regulated online market in January 2019.

Spelinspektionen spokesperson Anders Sims noted a new market survey indicating that the percentage of online gamblers who are aware of Spelpaus has risen from 54% in 2019 to 71% this year. Sims said this was “fine, but it could be even better.”

The new campaign, which will run through mid-January, features 13 different banner ads across a variety of websites, pushing not only the existence of Spelpaus but also educating viewers as to signs of potential problem gambling behavior. The new messages have a particular focus on women, relatives of problem gamblers and individuals whose first language isn’t Swedish.

Spelinspektionen was reportedly spurred to act after its latest market survey revealed the first increase in gambling participation in seven years. Some 66% of Swedes engaged in some form of gambling over the past year, six points higher than the 2019 survey, although the 2020 figure is on par with the numbers recorded in both 2017 and 2018.

The return to the level of recent years suggests that 2019, the first year of the regulated online market, was something of an anomaly. For instance, customers who patronized the state-run former monopolies Svenska Spel (lottery, betting) and ATG (racing) were able to access online casino products on both these sites for the first time.

Svenska Spel remains Sweden’s most popular online gambling option, with 55% of online gamblers having played on the site this year, although that was down from 63% in 2019. ATG, on the other hand, boosted its score from 17% to 23% (in part due to Swedish racing not suffering the disruptions that sports suffered from the COVID-19 pandemic).

In terms of private online operators, UK giant Bet365 remains the top draw, although its 4% score was unchanged from 2019 and the company was forced to share the top spot with the Kindred Group’s Unibet brand, which gained one point from 2019. Betsson and Mr Green maintained their 1% scores from 2019, while no other operators warranted a mention.

Disappointingly for Spelinspektionen, a whopping 95% of the survey’s 1,737 respondents were clueless as to how to tell if a gambling site held a license to operate in Sweden. Even more worrying, just over two-thirds expressed ignorance as to the alleged advantages of patronizing Swedish sites over their internationally licensed brethren.

Just 3% of the survey’s respondents admitted gambling with an internationally licensed operator this year, although, as the above figures suggest, how would they know if they had? That figure could grow larger should Sweden press ahead with plans to extend the current pandemic online casino restrictions through June 2021.

In terms of online vs. land-based participation, the numbers were evenly split in terms of lotteries (32%) and poker (5%), while online race betting (20%) outpaced land-based (15%), with an even higher ratio favoring online sports betting (17%) to land-based wagers (7%). Bingo players preferred retail operations (12%) to online (6%),  while online casino games (7%) got the nod over land-based play (4%).