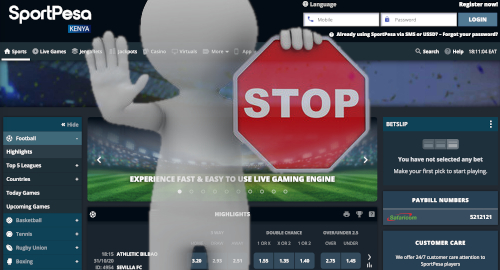 Kenyan sports betting operator SportPesa’s triumphant return to its home market has been rudely disrupted by the local gambling regulator.

On Friday, SportPesa’s official social media feeds enthusiastically proclaimed that the company was once again free to accept Kenyan bettors’ action thanks to the transfer of its brand name to a new locally licensed bookmaker, Milestone Games Ltd, about which precious little is known.

Maina told Chauro that there was “a variance in the trade name the board approved vis-à-vis the name Milestone Games Limited currently wishes to adopt.” Maina noted that Milestone had been granted authority to use the SportPesa brand by Sportpesa Global Holdings.

However, Maina claimed that the SportPesa tradename is the property of M/s Pevans East Africa Limited, which shares directors with SportPesa Global Holdings but has filed an appeal with the Nairobi Court of Appeal contesting “the issuance of the gaming license to Pevans East Africa t/a SportPesa.”

The irony here is high, as the appeal was filed in mid-2019 after the BCLB revoked SportPesa’s betting license due to the heavy-handed crackdown on dozens of betting operators by the Kenya Revenue Authority over disputed back-tax claims.

SportPesa’s license appeal won’t be heard until November 16 and thus Maina said Milestone is prohibited from using the SportPesa trade name, as well as the online betting domains under which the relaunched SportPesa had been operating and the pay bills through which the sites are processing online betting transactions.

The BCLB appears to have been irked by Milestone’s decision to operate under a different brand name than the one for which it was issued a license, as well as choosing to do so without notifying the BCLB or seeking its sapproval.

The BCLB said Milestone is free to operate under its own domains, although the Milestonebet.co.ke domain currently displays only a ‘coming soon’ splash screen. The ke.sportpesa.com domain appears unchanged from Friday and SportPesa Kenya’s official Twitter feed has yet to acknowledge any issues with its operations.