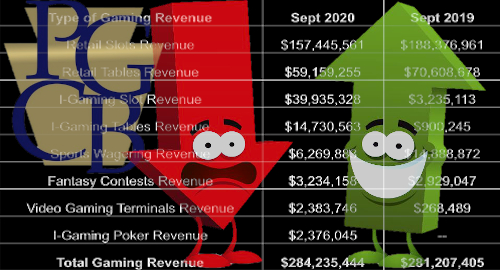 Online casino revenue totaled $57m, up $1m from August’s previous market record. The state’s regulated online gambling market was only a couple months old in September 2019, during which revenue totaled a mere $4.1m.

Online slots brought in $39.3m, about $300k off August’s total, while digital table games were up $1.1m from August to $14.7m. The state’s lone active online poker licensee, PokerStars, generated $2.37m in September, down from $2.7m from August.

The state’s sports betting operators reported revenue – after significant promotional credits intended on snaring as many new NFL bettors as possible – of just $6.27m, less than half the $14.9m earned in the same month last year and barely one-third of August’s record $18.3m.

For a change, online betting revenue ($1.15m) was eclipsed by retail betting ($5.12m), in part due to Penn National’s Hollywood Casino and Meadows Casino posting net online losses of $1.12m and $2.8m, respectively. Penn launched its Barstool Sportsbook brand midway through September, and its come-hither bonus offers clearly acted as an economic drag, at least for the time being.

As for the market’s lesser gaming verticals, video gaming terminal revenue nudged up slightly from August to $2.38m while ‘fantasy contests’ generated $3.23m, up around $400k from September 2019.

All-told, Parx Casino won September’s revenue race with $53.5m from all gaming verticals, with runner-up Rivers Philadelphia well back at $36.5m (but up nearly one-third year-on-year) and Wind Creek Bethlehem taking the bronze with $32m.