Home / Casino / Canada’s casinos crawling back to life, but still far from lively 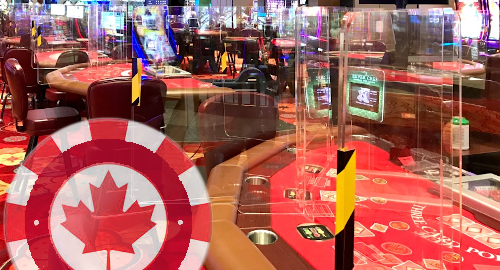 Canada’s land-based casino sector is slowly creaking back to life after its long pandemic shutdown this spring.

Last Friday, casino operator Great Canadian Gaming Corp (GCG) announced plans to reopen 11 casinos in Ontario that were ordered shut in mid-March as local COVID-19 infection rates spiraled out of control. The venues are scheduled to reopen on Monday, September 28.

The Ontario Lottery and Gaming Corporation (OLG) announced a “phased approach” to reopening the province’s casinos back in July, but left the ultimate decision on when to reopen to the third-party service providers who manage day-to-day operations at the facilities.

Few of these service providers saw then or see now much point in reopening given OLG’s restrictions, which include a maximum of 50 customers inside a venue at any given time, ensuring a minimum of two-meters physical distancing between guests and no live-dealer table games whatsoever.

GCG said Friday that its 11 venues will adhere to these guidelines, while also requiring slots jockeys to reserve a spot online before showing up at the casino. But it’s no surprise that GCG CEO Rod Baker warned investors that “we expect no material financial benefit to the Company from our 11 Ontario locations” under the current limitations.

Other large Canadian operators, including Gateway Casinos & Entertainment, have yet to announce plans to reopen their Ontario venues. Gateway was said to be musing about subdividing Caesars Windsor’s gaming floors into as many as a dozen 50-person ‘pods’ that could isolate groups of gamblers from each other, but OLG has yet to offer a verdict on this fudge.

GCG is also reopening its Casino New Brunswick property on September 28. The province of New Brunswick is limiting guest numbers to 25% of normal capacity, with only half of the venue’s slots allowed to operate while other amenities remain out of bounds for the time being.

GCG’s operations in British Columbia, including the now notorious River Rock Casino Resort in Richmond, have yet to receive their reopening permission. The BC government previously stated that casinos would be the last public venues to reopen and that was before the province’s COVID-19 infection rate took a sharp upward turn this summer.

Last week, Unifor, the largest private sector union in Canada, urged provincial governments to accelerate the opening of casinos to save thousands of jobs. Unifor president Jerry Dias said there was “no sound science that justifies reopening Walmarts, gyms and restaurants while at the same time keeping the casinos closed.”

The provincial governments are all too aware of the pain caused by the COVID closure and reopening restrictions. Alberta recently revealed that the closure of its casinos from March to June will cost the province around C$900m (US$680m) in lost revenue. Given that the province’s main revenue contributor – the oil and gas sector – is also in the toilet, Alberta’s fiscal outlook is particularly bleak.

When Alberta’s casinos reopened, they did so on a slots-only basis, but with fiscal panic setting in, medical caution is going out the window. Last week, Alberta announced that casinos could resume table game operations under physical distancing guidelines.

Said guidelines include a maximum of two players per table, unless each seat can be separated by a clear barrier to prevent droplet transmission. Poker tables will also be permitted to operate, provided operators are frantically cleaning cards, chips, rails, chairs and any other hard surfaces, while chasing away any railbirds who congregate to check out the action.