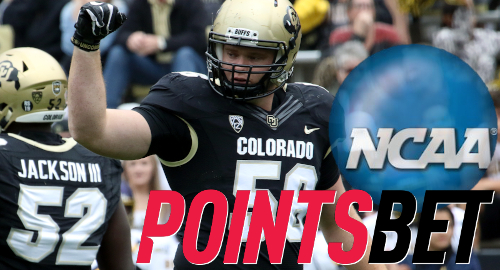 Sports betting operator PointsBet has struck the first ever partnership between a US college sports team and a bookmaker, demolishing yet another former taboo in US sports history.

Tuesday brought word – initially reported by Sportico, subsequently confirmed by the University of Colorado – that PointsBet had signed an exclusive ‘corporate partnership’ with the school’s Colorado Buffaloes, marking the first such deal between a National Collegiate Athletic Association (NCAA) Division-I athletics program and a betting operator.

Technically, the five-year deal is between PointsBet and Learfield IMG College, the media rights holder of the University of Colorado Athletics program. PointsBet will provide an unspecified “financial boost” for CU Athletics in return for marketing opportunities at the school’s sports venues and via radio broadcasts of CU games and other media channels.

PointsBet will be allowed to promote “the entire gaming category, including free-to-play sports games, daily fantasy sports, casino, online casino, and retail and online sports betting.” That may seem odd given the majority of CU students aren’t old enough to wager, but PointsBet’s new partnership will reportedly “emphasize and create awareness around responsible gaming and sports betting education.”

PointsBet has yet to launch operations in Colorado although the company has struck a marketing partnership covering all pro sports activities at Denver’s Pepsi Center arena. PointsBet is also in the process of establishing its new corporate headquarters in Denver, which may have helped seal the deal with its new collegiate partners.

Tuesday’s announcement is a far cry from the NCAA’s traditional approach to betting, which involved hitting back hard against anyone who dared tarnish the (alleged) purity of college athletics with wagering talk while perpetuating the fiction that the massive popularity of college sports wasn’t almost entirely due to sports betting.

The NCAA, like its major league counterparts, eventually dropped its knee-jerk opposition to sports betting and has been trying to figure out a way to profit from wagering ever since, while even throwing a few financial crumbs to their ‘student-athletes.’

PointsBet is an Australian wagering operator that has made major inroads since making its US market debut in New Jersey in late-2018. PointsBet has since launched in Indiana and Iowa and has a number of other states on the bubble, including Colorado, Illinois and Michigan.

PointsBet recently signed a blockbuster deal with NBC Sports that the company hopes will provide marketing inroads into numerous other states as they become available for legal wagering. Last week, PointsBet raised AU$200m via a new share placement that will help the company pay for the significant advertising commitments of its NBC deal.

PointsBet’s fiscal 2020 results showed revenue nearly tripling year-on-year to AU$82m in the 12 months ending June 30 as turnover doubled to AU$1.15b and active customers rose nearly two-fifths to 111k. Most of those figures stem from the company’s Australian operations, with net revenue from its nascent US operations totaling only $7m. But from tiny acorns mighty oaks do grow…