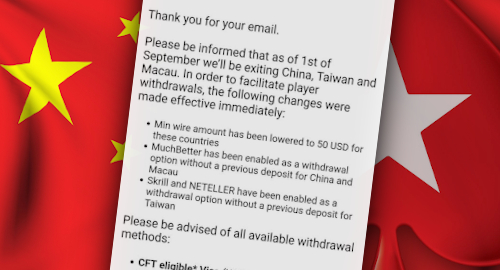 Online poker giant PokerStars is reportedly exiting China, Taiwan and Macau just days after its parent company said it planned to ‘switch off’ markets that fell outside its compliance standards.

On Monday, a user on the 2+2 online poker forum posted a screenshot of a message from Stars Support informing one of its customers that “as of 1st of September we’ll be exiting China, Taiwan and Macau.”

The message states that the company has made a number of banking changes “in order to facilitate player withdrawals,” including lowering the minimum amount available for bank wires for players in these markets, as well as enabling withdrawal options via Skrill and NETELLER without a previous deposit by customers in Taiwan.

None of the three markets currently permit legal online real-money poker play, and China in particular has been ratcheting up its fight against ‘cross-border illegal gambling,’ including much tighter scrutiny of online payment processing for gambling operators.

PokerStars’ Asian skedaddle comes just days after its parent company Flutter Entertainment announced tighter control over The Stars Group (TSG) unit, of which PokerStars is a main component. Flutter said there were “a small number of TSG jurisdictions that Flutter had previously determined it would not operate in and in such cases, we have now switched these markets off.”

Flutter also stated that it intended to boost “the quality of TSG’s safer gambling/anti-money laundering procedures.” Coupled with the market withdrawals, Flutter estimated this would cost the company around £65m per year, a price the company appears prepared to pay to ensure no blowback from regulators in other, more important jurisdictions, like the United States.

Under its previous management, PokerStars relied on a steady stream of business from Russia’s none-more-black market, which bans all forms of online gambling except sports betting. The online blacklist of Russia’s telecom watchdog Roskomnadzor currently features 131 PokerStars-related domains, of which two were added as recently as June.

Like China, Russian authorities have been doing their best to disrupt online gambling payment processing, while TSG’s former CEO Rafi Ashkenazi — who stepped down from Flutter’s board just last week — would publicly boast of the company’s efforts to circumvent these disruptions to its Russian cash flow.

Flutter’s Betfair brand cut off its Russian customers in May, so Stars’ Russian players will likely be anxiously watching their in-boxes for news that Stars will soon be bidding them dasvidaniya.