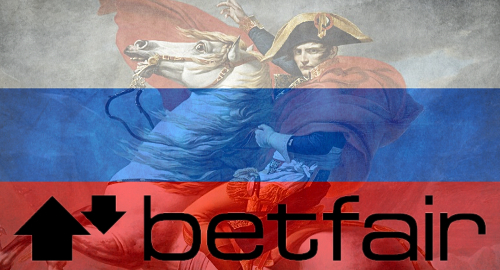 Online sports betting exchange Betfair is cutting off its Russian customers on the same day its parent company Flutter Entertainment completed its mega-merger with PokerStars’ parent The Stars Group (TSG).

Betfair’s Russian customers woke Tuesday to discover that the site had “taken the decision to close its websites for all existing Russian customers.” The site is no longer accepting new customer registrations and existing customers have been given until May 18 to withdraw the funds in their accounts.

There was no justification provided for the withdrawal, which apparently also applies to Estonia. Betfair has in the past withdrawn from certain grey/black markets after being publicly shamed for operating without approval of local authorities, although there’s no indication that Betfair has received any recent regulatory brushback in Russia.

Various Betfair domains have occasionally surfaced in the online blacklist of Russia’s telecom watchdog Rozkomnadzor. But Betfair.com’s most recent scarlet letter was issued at the end of January, so if this is a response to that tagging, it took a while to sink in.

It was previously reported that Betfair had negotiations with the Russian backers of Bwin.ru about a potential legal entry into Russia’s market but these talks were reportedly scuttled due to concerns over the “complex tax status” of betting exchanges in Russia.

News of Betfair’s Russian exit broke the same day that Flutter and TSG formally combined their operations, creating the world’s largest online gambling outfit. TSG’s flagship international brand PokerStars has long had a significant unauthorized presence in Russia, so perhaps Betfair is simply trying not to step on the toes of its new brand brother.

Russian-licensed bookmakers, like those around the world, have seen their business drop off by as much as 70% since the COVID-19 pandemic forced most major sports leagues to suspend operations. Unlike other markets, Russia allows only online sports betting, meaning Russian-licensed operators can’t rely on other gaming verticals such as casino or poker to make up the difference.

The lack of product on offer has resulted in significant drops in the number of visits to Russian-licensed betting sites. SimilarWeb data for the month of March showed market-leader Fonbet’s traffic falling 14% from February, with similar declines posted by rivals Liga Stavok (-18.5%) and 1xStavka (-13.7%).